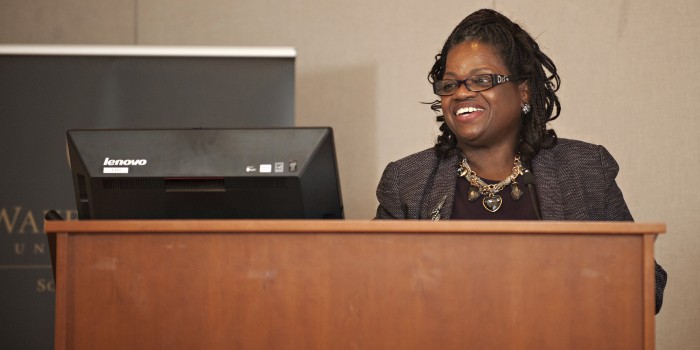 The Civil Rights Act should not be taken for granted. That’s the message the Journal of Law and Policy’s keynote speaker Barbara Arnwine stressed at the journal’s recent symposium, ”50th Anniversary of the Civil Rights Act: Looking Back & Moving Forward,” held on March 20, 2015, in the Worrell Professional Center.

In her keynote address, Arnwine reminded audience members that the Civil Rights Act has fundamentally shaped and contoured the daily life of all Americans since its implementation. She said that in addition to tackling both racial and gender discrimination, the Act has had a profound impact on society and cultural norms. However, she added, America as a society sometimes forgets to teach people that things have not always been this way and that our current perceptions of civil rights are forever transforming in accordance with societal advancements.

“I do want to encourage you to get involved in policing reform,” Arnwine added in her address, sharing her passion for reform and urging the audience to take positive action on the injustices that they perceive. “It is on us, we need you. We can all make a difference.”

In addition to Arnwine, the symposium featured scholars who addressed the intersection of law, policy and the Civil Rights Act. Recent developments in the United States and abroad have resulted in lawmakers sometimes implementing controversial laws regarding voting, self-defense and access to healthcare and education, according to Professors Luellen Curry and Wendy Parker, the symposium advisers.

According to her bio, Arnwine is internationally renowned for her momentous contributions on critical justice issues including the passage of the landmark Civil Rights Act of 1991 and the 2006 reauthorization of provisions of the Voting Rights Act. She also created the legendary Voting Rights “Map of Shame” in 2011, which served as a wake-up call to the American people about states’ proposals or disenfranchising legislation that primarily threatened the right to vote of minorities, students, low-income, disabled and elderly people. Arnwine graduated from Scripps College and went on to receive her Juris Doctorate from Duke University School of Law in 1976. She continues to champion civil rights and racial justice issues nationally and internationally in the areas of housing and lending, community development, employment, voting, education, and environmental justice.

Arnwine has served as the president and executive director of the Lawyer’s Committee since 1989 and has since been the recipient of numerous national, regional, and local awards for her impactful work. After 33 years of dedicated service to the Lawyer’s Committee, Arnwine has decided to step down from her position and move her career forward, claiming that her “bones speak and say it is time to do something different and move on.”

According to its website, Lawyers’ Committee is a nonpartisan, nonprofit organization, that was initially formed in 1963 at the request of President John F. Kennedy to involve the private bar in providing legal services to address racial discrimination.  The principal mission of the Lawyers’ Committee is to secure, through the rule of law, equal justice under law, particularly in the areas of fair housing and community development; employment; voting; education; environmental justice and criminal justice.

To learn more about the Lawyer’s Committee, visit their website here, and to learn more about Wake Forest’s ”50th Anniversary of the Civil Rights Act: Looking Back & Moving Forward,” read the event announcement here.