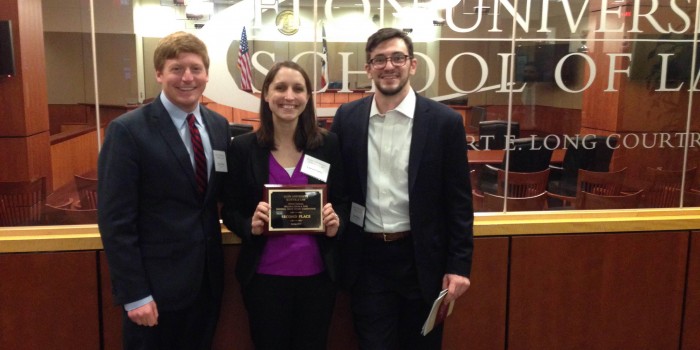 The Wake Forest Law team beat University of North Carolina, George Mason and William & Mary law schools during the three preliminary rounds to guarantee a spot in the sweet 16 and Saturday’s elimination rounds. On Saturday, the team beat Michigan State to reach the elite eight, Barry University to reach the final four, and Southwestern to reach the finals. After seven hour-long arguments in the two-day period, the team ultimately finished second behind a team from Florida Coastal.

This year’s problem involved physicians’ First Amendment and Due Process challenges to abortion regulations similar to those enacted recently in North Carolina. A lower court upheld the challenges, and the United States Supreme Court granted the State’s petition for certiorari. Greener argued the First Amendment issue for both sides, while Emery argued the Due Process issue for the Petitioner state and Menken argued the Due Process issue for the Respondent doctors, according to Professor John Korzen (BA ’81, JD ’91), director of the law school’s Appellate Advocacy Clinic.

The team was advised by Professors Laura Graham (’94) and Korzen and practice round judges also included Professors Michael Green, Bill Marsh, Zoe Niesel (’12) and George Walker. This was the first time that a Wake Forest team had made the finals in the Elon competition.

“Congratulations on a job well done,” Professor Simone Rose added in an email to the school regarding the team’s showing.