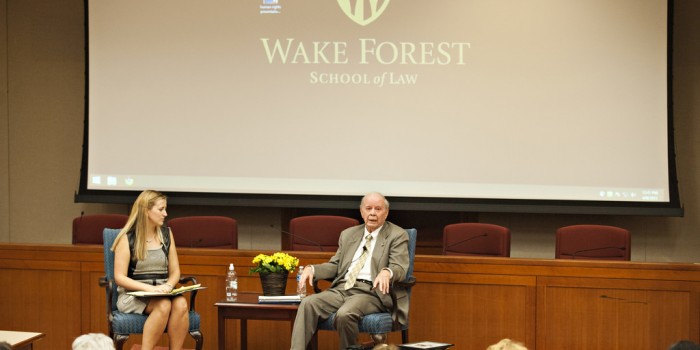 G. Eugene “Gene” Boyce (JD ’56) graduated first in his class at Wake Forest Law with one of the highest grade point averages in the school’s history although he laughingly concedes, “it was a very small class.”

He would go on to become an accomplished attorney practicing primarily in the areas of class action law, litigation, commercial litigation and constitutional law and to have a pivotal role in Watergate.

The featured speaker for the law school’s storied “Conversation With” series on April 8, Boyce was interviewed by Sarah Wesley Wheaton (JD ’17) in front of a large audience that included a number of those classmates in the Worrell Professional Center.

When asked about his most memorable personal moment at Wake Forest Law, Boyce recalled the lessons he learned from former Wake Forest Law Dean Carroll Weathers. “He taught ethics and had that practical ethical experience in dealing with clients,” he said. “I thought the world of him as an individual, as a lawyer and as a highly ethical person.”

Boyce began his career as an officer in the JAG Corps before taking a job at a law firm headed by I. Beverly Lake Sr., who was a professor of law at Wake Forest University, a practicing attorney, an assistant attorney general of North Carolina from 1951-1955 and a former justice of the North Carolina Supreme Court.

Boyce’s first civilian case was representing the Edgemont Free Will Baptist Church — a case that multiple lawyers had turned down. The case dealt with the question of court involvement in situations of religious freedom. He worked on it for three years and took it to the U.S. Supreme Court twice before winning.

Since then, Boyce has participated in more the 142 appellate proceedings in state and federal courts, including the U.S. Supreme Court, dealing with a variety cases ranging from the treatment of federal employees by individual states to the interpretation of the Constitution itself.

In one case, Boyce helped thousands of disabled veterans get the benefits they deserved. Though many of these cases were worth billions of dollars, he says the money was not his motivation for taking the cases. “I had a personal desire to help those people. I didn’t know if anything would come of it or not, but the constitutional aspect is what drove me into it and it ended up pretty good.”

Boyce played a prominent role in exposing the Watergate scandal. After running a friend’s campaign for the U.S. House of Representatives, he ended up in Washington, D.C., where he served as assistant chief counsel to the Watergate Committee. Working with Sen. Sam J. Ervin (D-N.C.) during the 99 days of televised hearings and worldwide investigation related to the 1972 presidential campaign activities, Boyce was the lead investigator in the discovery of President Richard Nixon’s White House taping system of the Oval Office and Cabinet Room.

His Watergate involvement was the result of a series of accidental events, Boyce says. “These kind of circumstances will occur, as they have already in your life,” Boyce advised law students. “Pick the right ones. Be careful, be prudent, be cautious, but just pick the right ones. And a lot of luck will help you.”

Boyce also served as counsel to the U.S. Senate Ethics Committee and played a central role during the censure proceedings against Sen. Herman E. Tallmadge (D-Ga.). 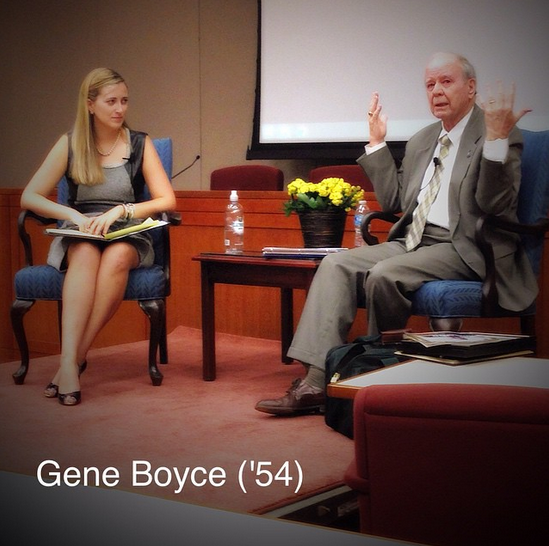