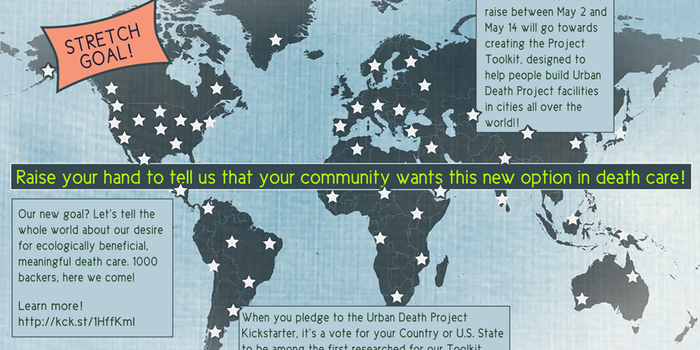 Wake Forest Law Professor Tanya Marsh’s Funeral and Cemetery Law class is working to help bring the natural process of human remains decomposition to your state. As the first and only course of its kind at an American law school, Marsh’s course is already an innovation. By collaborating with the Urban Death Project and its Kickstarter campaign, the course is pioneering new models of experiential learning.Urban Death Project founder Katrina Spade says, “the Urban Death Project is a new system that utilizes the natural process of decomposition to safely and gently turn human remains into soil. The project is creating a meaningful, equitable, and ecological alternative to existing options for the care of the dead.  It’s a way for our deaths to be more like our lives—full of meaning and a deep respect for the earth. It’s also a way that we can continue living on in our communities, even after we’ve died.”

A Kickstarter campaign, with a goal of $75,000, was launched in April 2015 to raise funds to complete the second phase of design development, including preparation of a set of engineering drawings. The Urban Death Project plans to build its first facility in Seattle, Wash., and is developing a “toolkit” to help individuals, municipalities and organizations plan facilities in their own neighborhoods.

Professor Marsh’s Funeral and Cemetery Law class examines the laws regarding the status, treatment and disposition of human remains. In previous semesters, students have researched the law of a particular state and “represented” clients in hypothetical exercises. In the Fall 2015 semester, students will expand on this model to research the law of a particular state with respect to the feasibility of the Urban Death Project, and the resulting work product will be incorporated into the toolkit.  Planners will be expressly cautioned that the legal briefings prepared by students will not substitute for the advice of an attorney licensed to practice in a particular state, but they should provide a great start for planners and their counsel.

“This exciting collaboration with the Urban Death Project will allow students in Funeral and Cemetery Law to learn about the law while engaging in a unique and intensive experiential learning activity,” Professor Marsh explains.  “By focusing our attention on the feasibility of this project in various states, students will learn to appreciate the significance of small differences in law.  We will work on client communication skills throughout the semester in order to produce briefings that can be readily integrated into the toolkit.”

The Urban Death Project Kickstarter campaign was fully funded on May 2, 2015.  It immediately announced a “Stretch Goal” to engage 1,000 backers in the campaign.  To encourage progress towards the stretchgGoal, Professor Marsh agreed that the states with the highest number of Kickstarter backers by May 14 will be researched by her class.

More information about the Urban Death Project can be found at www.urbandeathproject.org.