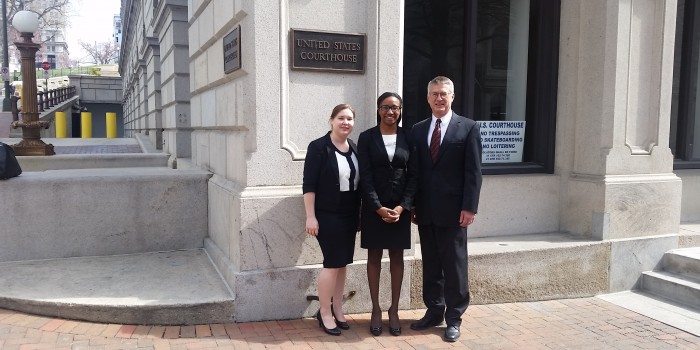 In a unanimous published opinion, the United States Court of Appeals for the Fourth Circuit ruled on June 30 in favor of the Appellate Advocacy Clinic, in the case of United States v. Joseph Newbold. Ashley Waring (’15) had argued to the panel of Fourth Circuit judges on behalf of Defendant Newbold on March 24, at the Fourth Circuit courthouse in Richmond, Virginia. Kathleen Bradway (’15) and Professor John Korzen (’91), director of the Appellate Advocacy Clinic, assisted with the briefs and oral argument preparation.

In Newbold, the defendant pled guilty in 2006 to a federal drug offense and then was sentenced under the Armed Career Criminal Act (ACCA) due to a conclusion that he had three prior serious drug offenses. Under ACCA, a predicate “serious drug offense” is one that may be punished by 10 or more years. Newbold had three prior drug offenses in North Carolina state court, but he contended that one of them was not punishable by 10 or more years. He had received three years, but if the sentencing court had found aggravating factors he could have been sentenced up to 10 years. When Newbold pled guilty in federal court in 2006, the law was that the term of a “predicate” offense was based on what the worst defendant could have received, not the actual defendant in a case. Because a hypothetical defendant could have been sentenced up to 10 years had aggravating factors been found, Newbold’s predicate conviction was deemed a “serious drug offense.” His sentence under ACCA was therefore affirmed on direct appeal in 2007.

Since then, based on analogous Supreme Court decisions, the Fourth Circuit has held that the term of a predicate offense must be determined on what the actual defendant could have received, not the hypothetical worst defendant. Newbold filed a habeas corpus petition under 28 U.S.C. §  2255 and pursued his case pro se for years in three different courts, doing a fine job, before the Fourth Circuit appointed the Appellate Advocacy Clinic to represent him. The team of Waring, Bradway and Korzen then prepared two briefs in the Fall 2014 semester, leading up to the March 24 oral argument.

In its June 30 opinion, written by Judge Roger Gregory and joined by Judge Robert King and Judge Andre Davis, the Fourth Circuit first decided whether Newbold’s challenge could even be considered under section 2255, holding that it could. The Court noted that the ACCA enhancement subjected Newbold to a 15-year minimum sentence, while without the enhancement he was subject to a 10-year maximum sentence. The Court then held in agreement with Newbold that the predicate conviction in question was not punishable by 10 or more years, due to the absence of aggravating factors in the state sentencing court’s judgment. The Court remanded for resentencing without the ACCA enhancement.

“I am extremely proud of the work Waring and Bradway did in this appeal,” Professor Korzen said.  “It is very rewarding when we have the opportunity to make ‘good law’ as in this appointment.”