Most recent graduates take a breather after they finish the bar exam. Daniel Gibson (JD ’15) went to work finishing up a book instead. “Cemetery Law: The Law of Burying Grounds in the United States” was published on Monday, Aug. 24, 2015. 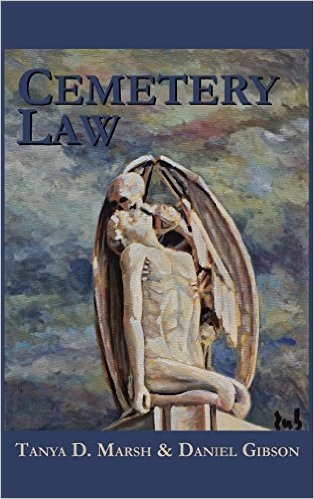 Gibson worked with Marsh during law school as her research assistant for more than two years, helping her conceptualize and organize the materials for her first “Funeral and Cemetery Law” course in Spring 2014 and her treatise “The Law of Human Remains”  published in early August.

For “Cemetery Law,” Marsh and Gibson teamed up to collect, annotate, organize and explain materials about the history and structure of the law of cemeteries in the United States.“Daniel and I had collected an enormous amount of materials that had yet to be curated or analyzed,” Marsh explained, “and one day we just thought—why not publish them?”

The duo began working on the book in the spring, Marsh said, “with the intention that we would have a rough draft done before Daniel had to begin bar preparation. I used the rough draft as the casebook for the Comparative Property class that I taught in the Wake Forest summer program in Vienna this July. When I returned from Vienna and Daniel finished the bar, we sprinted to finish the book so that I can use the final version, along with “The Law of Human Remains,” in my Funeral and Cemetery Law class this fall. The book was done this weekend and the class starts today, so we made it in under the wire.”

Marsh and Gibson were able to turn a draft manuscript into a finished book so quickly because they self-published “Cemetery Law” with Amazon’s CreateSpace platform.

“We looked at a few self-publishing options,” Marsh said, “mainly because I wanted to experiment and find a way to offer the book at a low cost. We went with CreateSpace because it offers print-on-demand, which keeps costs low, and it is tied in to Amazon, which means the book is widely available. We have been able to create a 450-page casebook that retails for $30 and can be shipped to students in less than a week. We can revise whenever we want. The only investment that we’ve made is our time, so I’m excited to see if self-publishing may be a viable option for academic publishing in the future.”

Gibson added what surprised him the most about the research “is just how much cemeteries and how we bury people has changed. What we think is normal isn’t historically normal. Embalming and putting someone in the ground only became normal after the Civil War.”

Marsh explained the group effort: “When I was in law school, one of my professors co-authored a law review article with a classmate of mine. That made an enormous impression on me at the time, and I know that it meant a tremendous amount to my classmate and his career. Because cemetery law is a fairly spare field in terms of scholarship, there are a lot of opportunities for students to make a real contribution. It is a win-win.”

The other advantage of publishing with Amazon, according to Marsh and Gibson, is that they were easily able to transform “Cemetery Law” into an ebook. The ebook is available on Amazon for $9.99, but Marsh and Gibson have made it available for free here on Aug. 25- 26.

Professor Marsh is a graduate of Indiana University and Harvard Law School.  She joined the faculty at Wake Forest University School of Law in 2010, following 10 years of full-time practice in Indianapolis, Ind.  Marsh teaches courses in property and real estate law, as well as the only course on Funeral and Cemetery Law in a U.S. law school.  Marsh is a licensed Funeral Director in the State of California and a nationally recognized authority in the law of human remains.