Beginning Monday, Oct. 5, the highly acclaimed international exhibit, “Lawyers Without Rights: Jewish Lawyers in Germany under the Third Reich,” portraying persecution of Jewish lawyers and judges during Nazi era, is available for viewing through Friday, Oct. 30, in the Wake Forest Law Library Rotunda in Worrell Professional Center on the Reynolda Campus. The exhibit is free and open to the public. Times for the exhibit include: Monday – Thursday: 8 a.m. – 11 p.m., Friday: 8 a.m. – 9 p.m., Saturday: 9 a.m. – 9 p.m. and Sunday: 10 a.m. – 11 p.m.

Sponsored by Wake Forest Law in conjunction with the American Bar Association and German Federal Bar, the exhibit has been shown in nearly 100 cities in Germany, the United States and others parts of the world, according to organizers.

The idea for the exhibit was conceived in 1998 when an Israeli lawyer asked the regional bar of Berlin for a list of Jewish Lawyers whose licenses had been revoked by the Nazi regime, said Axel Filges, president of the German Federal Bar.

“The regional bar decided not only to research a list of names but also to try to find out more about the fates behind all those names,” Filges said. “Some were able to leave the country after the Nazis came into power, but very many of them were incarcerated or murder. The non-Jewish German lawyers of those days remained silent. They failed miserably, and so did the lawyers’ organizations. We do not know why.”

After the Berlin bar transformed its research into an exhibit, other regional bars began asking whether they could show it and add their own research. “So, like a puzzle, a portrait of the fate of Jewish lawyers in Germany has emerged step by step,” Filges said.

What:   Lawyers Without Rights: Jewish Lawyers in Germany under the Third Reich

View the hours of the library here. 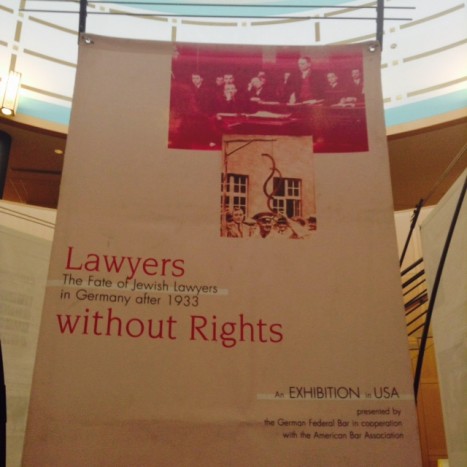