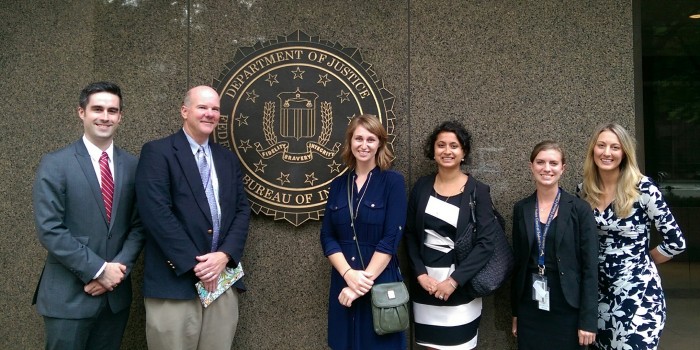 When Professor Abigail Perdue joined the faculty in 2012, she dreamed of establishing a unique summer program that would enable Wake Forest Law students to spend the summer externing at some of the most prestigious courts in Washington, D.C.

Her own clerkships at the U.S. Court of Federal Claims and Court of Appeals for the Federal Circuit provided her with a once-in-a-lifetime opportunity to work with some of the most amazing jurists in America.

“My brilliant judges and incredible fellow clerks not only taught me how to be a better thinker and writer, but more importantly, inspired me to live a better life – one that exemplifies thoughtfulness, compassion, honor and integrity,” Professor Perdue says. “My judges became my mentors, and my fellow clerks became my friends. But they both became my role models.”

That’s why Professor Perdue says she was determined to ensure that Wake Forest Law students could enjoy that same clerkship experience. She established the Washington, D.C., Summer Judicial Externship Program in May 2013. The program is a one-of-a-kind experiential learning opportunity that places rising first-year and second-year law students into unpaid summer externships with federal judges or special masters at participating courts in the nation’s capital, Perdue says.

In addition to the full-time, eight-week externship, which gives students a chance to interact with federal judges and law clerks on an almost daily basis, students simultaneously enroll in a summer course taught by Professor Perdue, who lives in D.C. during the program to provide on-site support to students and their supervisors, to organize networking events, lunch presentations and to teach interactive weekly sessions.

“My course is tailored to judicial clerking and covers a vast array of practical topics from judicial confidentiality to how to manage a docket,” Perdue explains.

To ensure that students are “clerkship-ready,” she requires students to put their knowledge into practice by drafting a bench memo and judicial opinion on a pending Federal Circuit case and to attend oral argument in the case. Students also draft short reflections and write a lengthy academic paper on a topic of their choice.

According to Cate Berenato (JD ’17), “The course component of the judicial externship program enhanced my summer experience because I came into work each day with a better understanding of what was expected of me. Professor Perdue prepared us well and in advance for the types of writing assignments that the judges and clerks asked us to draft. I know that the course component made me a more valuable addition to my office than I otherwise would have been.”

Since some of the most important lessons are learned outside the classroom, the course also includes fun and informative field trips and countless networking opportunities. As one student observed, “The guest speakers exposed me to various areas of the law and allowed me to practice networking in a smaller environment. Every week Professor Perdue had another fun event for us to go whether it was a networking event . . . or a Nationals baseball game.”

During the summer 2015 program, students toured the U.S. Supreme Court and met the Counselor to the Chief Justice. They also toured the Federal Bureau of Investigation (“FBI”) and met with two FBI attorneys.

“They also enjoyed a tour of the U.S. Capitol and a night at Nationals Park with more than 20 program supporters, including some alumni,” Perdue says.

Because networking and professionalism are key components of the course, each week federal judges, attorneys at major D.C. law firms, current and former law clerks, in-house counsel and even a federal prosecutor visit the class to discuss diverse areas of law, including government contracts, energy law, government affairs, administrative law, intellectual property law, and even cybersecurity, according to Perdue.

Although each student’s summer experience is unique, one thing remains the same – each student learns a tremendous amount and has a lot of fun doing it. Just ask Taryn Walker (JD ’14).

“The program not only helped me to obtain two clerkships, but also prepared me to perform well in those positions,” Walker says. “Because the program provided me with a strong foundation of legal research, analytical and writing skills for the judicial clerkship setting, I was able to transition rather seamlessly into my current clerkship position and am able to apply those skills in my everyday tasks. The program is a tremendously valuable experience to have during law school as it offers a unique and unmatched opportunity for both professional and personal growth.”

A few months after Karon Fowler (JD ’15) completed the program, she obtained a coveted summer associate position at Morgan Lewis, a prestigious, international law firm that hosted the program the prior summer. Fowler went on to win the Stanley Moot Court Competition and obtain a federal district court clerkship. “The D.C. program was an incredible experience and one of the highlights of my time at Wake Forest,” she says. “It was an opportunity to work at some of the top courts in the country, develop skills that are transferable to any practice and learn about a plethora of practice areas. I would suggest the program for any student.”

Current Student Bar Association President and program alumnus Joseph Greener (JD ’16) is another program success story. Only a few months after completing a summer externship at the Office of Special Masters in the United States Court of Federal Claims, which exclusively handles Vaccine Act litigation, Greener earned a spot in the Final Four of the Stanley Moot Court Competition and received an offer to work for the Vaccine Division at the Department of Justice in Washington, D.C.

“The D.C. program was instrumental in opening me up to the region,” he says. “The program propelled me into the fall semester where I earned my highest grades of law school. Through the connections I made during my summer, I was able to secure an internship in D.C. I truly cannot thank Professor Perdue and the many people of the Wake Forest Law community who make this program possible enough.”

Greener has been offered a clerkship after graduation with Judge Lawrence Leonard, a magistrate judge from the Eastern District of Virginia in Norfolk.

Alexis Iffert (JD ’16) externed at the United States District Court for the District of Columbia and went on to win the Stanley Moot Court Competition a few months later, following in Fowler’s footsteps. Indeed, in the fall of 2014, three out of the Final Four of the Stanley Moot Court Competition had participated in the program, including Rachel Shields (JD ’16). Katye Jobe (JD ’16) made the Elite Eight and attributed her success, in part, to the lessons learned during the program.

“I am thankful that I chose Wake Forest because it led to a fantastic summer experience working as a judicial extern at the Federal Circuit,” Jobe says. “The nine weeks were some of the most professionally rewarding of my life. The feedback I received, along with my personal observations of the excellent litigators arguing at the Federal Circuit, helped me progress to the Elite Eight of Wake Forest’s Moot Court competition.”

After completing the program, U.S. Army Captain Brandon Heffinger (JD ’15) received an offer to work at the Charlotte office of Alston and Bird, LLP, and recently accepted an offer to clerk at the U.S. District Court for the Western District of North Carolina. And program alumna Elizabeth Dahl (JD ’16) obtained a summer externship at the Office of the Attorney General in Richmond, Virginia.

“I would definitely participate in the D.C. program again,” says Dahl, who has just accepted a clerkship at OSM upon graduation. “It was the most well-rounded job experience I have received, and I felt that combining the class component with the externship really prepared me and taught me the skills I needed to be a successful judicial extern. The program is one of my favorite law school memories. It gives students so much valuable real-world experience . . .”

Professor Perdue adds there are many ways to get involved, including sponsoring or mentoring a student, hiring a student as an extern or serving as a guest speaker. If you would like to support the program or get involved, please contact her at perduea@wfu.edu. For more information on the Washington, D.C., Summer Judicial Externship Program, visit http://dc-judicial-externship.law.wfu.edu/.