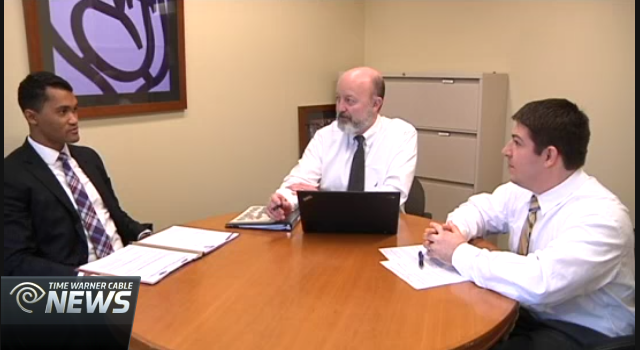 The law school’s new Veterans Legal Clinic is featured in the following story by TWC News. The original story can be found here.

WINSTON-SALEM, N.C. - Military members are taught to be self-sufficient, but  they also learn how to use their team to accomplish the mission. Veterans , who are also law students at Wake Forest University, are operating together to offer a free clinic helping their fellow brothers and sisters get the legal help they may need.

During that time Harper served as a U.S. Army captain and spent nine months in Afghanistan.

“The two most confusing days of your life are when you join the military and when you get out of the military,” said Harper. “The reason I say that is because it’s a different world [with its own customs, structure, and even language.]”

Harper considers his overall experience in the military good, but there’s some people who’ve had an extremely difficult time.

“We would see these young soldiers who are 18 or 19 years old and they were embedded with Afghan police,” said Harper. “We’re asking them to do extraordinary things like go back out on a mission a day after one of their closest friends had been killed, or go out on mission after finding out their wife has filed for divorce.”

Then, when they come back they’re expected to transition into civilian life; an adjustment Harper said is complicated enough without having legal issues to battle. So that’s why he got involved in Wake Forest University’s Veterans Legal Clinic that officially launched this fall.

“The clients are coming from all over the state of North Carolina, and they bring in a range of civil issues,” said Wake Forest University School of Law Professor Steven Virgil. “We are the fourth largest military concentration state within the United States and with the population comes a whole range of unique issues.”

“During Vietnam PTSD wasn’t a diagnosis, so a lot of service members couldn’t qualify for disability or medical benefits because of their discharge status,” said WFU third-year law student Chris Alderman. “What we’re trying to do now is get these service members an upgrade to their discharge so they can qualify for these benefits. As a leader of the marines you’re always told take care of your guys and I don’t think  that stops once you end your serviceI think that’s something you need to carry forward into whatever you do after the military.”

The Veterans Legal Clinic is open Monday through Friday from 9 a.m. to 4 p.m.