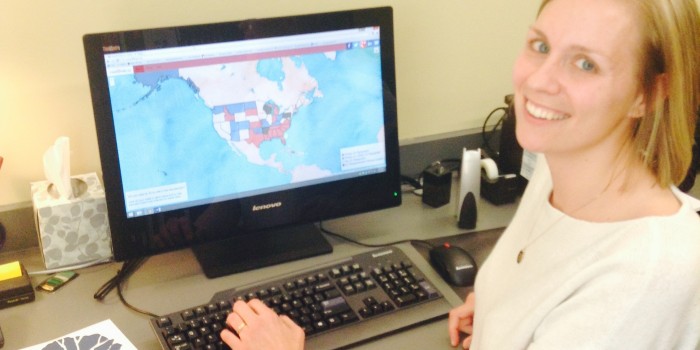 Erink McKee ('15) in the Wake Forest Elder Law Clinic displaying the site she and her husband Phillip Bost created, VoterIDHelp.org.

The National Jurist named Wake Forest Law as one of the best law schools for practical training in February 2015. The grading was based on the number of students who participated in the law school’s growing hands-on learning opportunities including clinics and externships. Clinic students had myriad chances to do just that over the past year from arguing and winning a federal appeal to delivering more than $1,000,000 in value to business and community development in the Winston-Salem, North Carolina, area and beyond. At least two clinics secured significant grants to help area children and senior citizens this academic year. Alumni who are interested in working with the clinics, should contact Professor Steve Virgil, who is executive director of experiential education, at virgilsm@wfu.edu or 336.758.4280.

In a unanimous published opinion, the United States Court of Appeals for the Fourth Circuit ruled on June 30 in favor of the Appellate Advocacy Clinic, in the case of United States v. Joseph Newbold. When Newbold pled guilty in federal court in 2006, the law was that the term of a “predicate” offense was based on what the worst defendant could have received, not the actual defendant in a case. Kathleen Bradway (JD ’15) and Professor John Korzen (BA ’81, JD ’91), director of the clinic, assisted with the briefs and oral argument preparation. “I am extremely proud of the work Ashley Waring (JD ’15) and Bradway did in this appeal,” Korzen said. “It is very rewarding when we have the opportunity to make ‘good law’ as in this appointment.” Waring and Karon Fowler (JD ’15) both argued on March 24 in the Fourth Circuit on behalf of the clinic. It was the first time that the Appellate Advocacy Clinic had two arguments on the same day in the Fourth Circuit, Korzen says. The clinic students and staff in March visited the U.S. Supreme Court of the United States in Washington, D.C., and observed oral argument in Brumfield v. Cain, a federal habeas case originally tried in Louisiana state court. Clinic students have made this trip annually since 2007.

The Child Advocacy Clinic has received a grant for $100,000 over two years from the Jessie Ball duPont Fund. According to Dean Suzanne Reynolds (JD ’77), the grant will enable the clinic, which works with the Children’s Law Center of Central North Carolina (CLC), to serve as a voice for greater numbers of children in the courtroom with the intent of breaking the cycle of violence and to track the decrease in family violence as a result of the guardian and publish those results to convince other judicial districts to use the custody attorney guardian model. The grant will allow the law school to hire a custody attorney guardian to work in the clinic/center partnership. The project is jointly led by CLC Executive Director Iris Sunshine (JD ’89) and Dean Reynolds. In other news, the CLC, which was co-founded by Penny Spry (JD ’82), is celebrating its 10-year anniversary this year. In October 2014, country singer/songwriter/author Naomi Judd was the keynote speaker for the third annual Home Free fundraising event for the CLC and Family Services. Judd promoted domestic violence awareness by sharing personal experiences from her life. According to organizers, it was the most successful Home Free event raising more than $110,000.

The Community Law and Business Clinic (CLBC) relocated on July 1 to the newly renovated Worrell Professional Center. Previously housed downtown in the old Wachovia Building, the clinic has provided legal and business consulting services to more than 1,000 small businesses and social enterprises since launching in 2009. During the 2014-2015 academic year, 50 law students took part in the clinic under the supervision of Professor Virgil, founding clinic director. The students collectively contributed more than 7,000 hours of pro bono legal services to local community economic development efforts, assisting 218 clients and delivering more than $1,000,000 in value to business and community development in North Carolina and beyond. Roughly 70 percent of the legal services were for for-profit small businesses and 30 percent nonprofit. In addition to launching a new partnership with the private bar as part of the Arts & Entertainment Practice Group, the clinic expanded its outreach efforts in partnership with the Forsyth Tech Small Business Center and created new avenues to reach small and micro businesses in Winston-Salem. “The multitude of clients were drawn from across North Carolina, extending to a nonprofit working in Ghana as well as businesses in Central America,” Professor Virgil says.

The Elder Law Clinic received a grant from the Raleigh-based North Carolina Society of Health-Care Attorneys to fund community outreach regarding the health care rights of lesbian, gay, bisexual and transgendered (LGBT) people. Professor Kate Mewhinney, clinic director, says the grant allows the clinic to collaborate with other community groups to present educational events for health care providers on ethical and legal issues related to care of LGBT patients. Government regulations and accreditation rules now require hospitals to give equal treatment to LGBT patients and to allow patients to have non-relatives, including domestic partners, as visitors. The clinic also partnered on numerous other events including with the N.C. Center for Voter Education, Democracy North Carolina, AARP North Carolina and the League of Women Voters of the Piedmont Triad to host, “Voting in N.C.: What’s Changed and What to Know,” on Oct. 8 at Senior Services in Winston-Salem. And along with Professor Mewhinney, Alison Ashe-Card of the Office of Career and Personal Development, Jessica Bell (JD ’05), LaRita Dingle (JD ’15) and Crissy Dixon (JD ’16), participated in a free Advanced Healthcare Planning workshop on April 15 at Senior Services as part of a National Healthcare Decisions Day (NHDD) initiative.

The Innocence and Justice Clinic relocated in May from its Reynolda Road location to the newly renovated Worrell Professional Center. Under the direction of Professor Mark Rabil, clinic students are working to free a man who’s been in prison for more than 35 years for a rape he says he didn’t commit. The work will be featured in a new “Serial” podcast series the law school is sponsoring beginning in Winter 2015. The clinic’s efforts in this particular case were also featured in an extended news feature, which aired in February on a WGHP Fox 8 special report. Each year the clinic, which began in 2009, reviews hundreds of claims of actual innocence, looking for instances of wrongful convictions of serious crimes. “What our program does is give hope to these inmates who are serving these long sentences,” Professor Rabil says. Students in the clinic study the causes of wrongful conviction while they review and investigate claims of actual innocence by inmates and, where appropriate, pursue legal avenues for exoneration and release from prison. Typically there are 10 students in the clinic per semester and up to an additional 10 doing independent study, according to Professor Rabil, who spoke at the “Mass Incarceration and the Criminal Justice System” symposium sponsored in March by WFU’s The Humanities Institute.

After more than three decades as a four-hour course, the Litigation Externship Clinic became a five-hour graded course in the fall of 2014 with the added option of a sixth credit hour in taking and defending depositions. Professor Carol Anderson is director of the clinic that served 49 students, who had nearly 100 externship placements during the 2014-15 school year, including two students placed exclusively with the U. S. Attorney’s Office for the Middle District. Clinic students are required to do both a civil and a criminal placement concurrently over the course of the semester. Civil placements include a wide variety of private firms, government entities and general counsel offices. The six-week concurrent criminal placements include state and federal government offices. Most students appear in court on behalf of clients or government entities during their criminal placement; some do so on the civil side. Students may also try full jury trials. “All of our students made appearances in state district court,” Professor Anderson says. “Some appeared in state superior court as well as federal district court. Many students interviewed clients; others participated in depositions or mediations.” The clinic welcomed two new supervising attorneys, Sonny Haynes of Womble Carlyle and Brad Roehrenbeck (JD ’06), general counsel of MedCost. Clinic alumnus Chris Nichols (JD ’94) delivered a lecture on mediation. At the spring banquet. Bill Walker (JD ’77) and Jack Van Zandt (JD ’73) were recognized for mentoring their 50th clinic students and  Lee Davis (JD ’77) was recognized for helping create and teach a new Depositions Intensive Weekend.

Under the direction of Professor Steve Virgil, the Micro-Trade Development Clinic explores economic, community and human development efforts in Nicaragua from various perspectives. Professor Virgil along with  Professor Barbara Lentz took 32 law students to Central America in January to work with medium- and small-sized enterprises and they plan to return in January 2016. “The class looks at issues of development and trade and provides students with an opportunity to work with clients while exploring the culture of Nicaragua,” Professor Virgil says. “Perhaps as a testament to this class, more than 150 students have traveled to Nicaragua with the clinic over the past six years.” Under the supervision of Professor Virgil, students advised clinic clients on U.S. import and commercial laws, including USDA/FDA regulations and the use of letters of credit and contract enforcement in international transactions. “You get immersed in knowing that you are affecting that person on the other side of the piece of paper and you get to see the results,” says Jeff Willison (JD ’15). “Through this course, you’ll find places in the law you never knew about.”