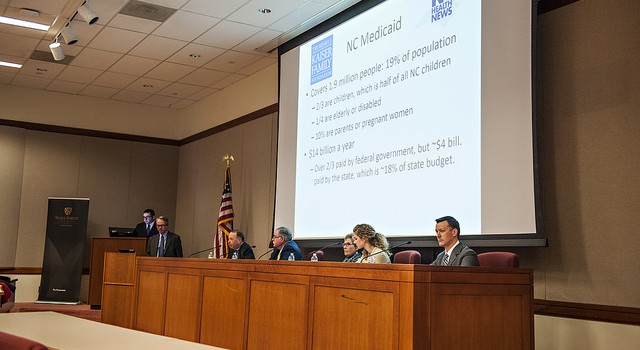 The following story was originally written by Winston-Salem Journal reporter Richard Craver and ran here. A recording of the web cast of the event can be accessed here.

A group of health care experts acknowledged Monday that Medicaid expansion is at least a year away from serious consideration in General Assembly.

However, they stressed at a forum at Wake Forest University Law School that expansion for an additional 500,000 North Carolinians doesn’t have to wait until the potential completion of Medicaid reform. There are options outside expansion, such as providing vouchers, to help the working poor escape the coverage gap, said state Rep. Donny Lambeth, R-Forsyth, a key writer of the reform bill that passed the legislature in September.

The big question is whether there is any support among Republican legislative leaders, especially in the Senate, for such funding since reform appears at best to be a 4 1/2-year process to complete.

Medicaid covers about 1.9 million North Carolina residents and is a $14 billion-a-year program.

The Medicaid reform law would coordinate physical, behavioral, dental, pharmacy and long-term health services and costs through the compromise of oversight by provider-led entities and for-profit managed care organizations.

The Affordable Care Act provides resources for states to extend coverage to all non-elderly adults with income below 138 percent of the federal poverty level, currently $32,253 for a family of four and $18,000 for an individual.

The majority of eligible North Carolinians have jobs but lack insurance coverage for reasons such as their employer doesn’t provide it, they work one or more part-time jobs, they don’t want it or can’t afford the monthly premium cost.

“We support expansion in North Carolina, but don’t believe it will happen in the near future,” said Michael Parkerson, chief marketing and strategy officer for Blue Cross Blue Shield of N.C.

“Even if it is expanded, it won’t solve all problems. Certainty and predictability of cost are important, but it’s just a start.

“Affordability has to be put back into the ACA” for the beneficiary, the health care system and insurers, Parkerson said.

Janet Hoy, president of the Orange-Durham-Chatham chapter of the League of Women Voters, touted the potential for adding 43,000 jobs, $21 billion in federal funding and $864 million in new state revenue that would come with expansion.

“Consider Medicaid expansion and find out where legislators stand on the issue before you vote in March and November,” Hoy said.

Katherine Restrepo, health and human services policy analyst for the libertarian think tank John Locke Foundation, said her group’s concern is expanding Medicaid beyond its original intent as a safety net for low-income children, pregnant women, and the aged, blind and disabled.

Restrepo decried what she called a “perverse incentive” to add patients and services because of the 2-for-1 federal match for N.C. Medicaid spending.

Two audience members asked about whether North Carolina can achieve what Gov. Pat McCrory wants — a North Carolina plan and not a Washington plan — by legislators agreeing to expansion to win federal support for reform waiver requests.

Restrepo said she is concerned about what “Medicaid will require North Carolina to do to get the necessary waivers … that may not be our best options.”

Hoy acknowledged reform without expansion may get little push from the Obama administration in its final year.