The Transformation of Worrell Professional Center 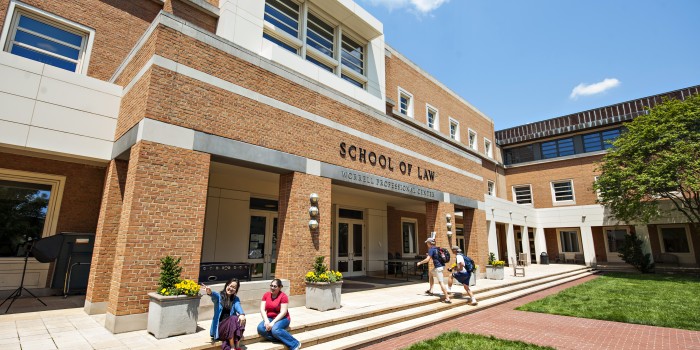 In 1990, George H.W. Bush was president, the World Wide Web/Internet protocol (HTTP) and WWW language (HTML) was created, the cost of a Superbowl ad was $700,000 and ground was broken on the Worrell Professional Center.

Three years later the Wake Forest School of Law and School of Business moved into the building designed by famed architect Cesar Pelli, who designed the World Financial Center, among other landmarks. With the departure of the School of Business in the summer of 2013, the School of Law embarked on an ambitious transformation. This fall, after more than $9 million in donations and two years of construction, students, faculty, staff and alumni are enjoying meeting in the new Law Commons (complete with a fireplace) over a cup of Starbucks or Krankies coffee and a snack from the Legal Grounds Cafe. Kudos to Associate Dean of Administrative and Student Services Ann Gibbs who worked tirelessly with LS3P lead architect Scott Baker and I. Long Construction to ensure the project was done in time for classes. Following are some of the highlights of the recent construction that we hope you will come see in person during this year’s Law Alumni Weekend, Oct. 23-24.

Doug (JD ’79) and Peggy Abrams (JD ’80) have devoted their lives to two ideas: the power of the law to change lives and the importance of using their success to help extend justice to some of society’s most marginalized members. They are partners in the firm of Abrams & Abrams PA in Raleigh, which specializes in catastrophic personal injury cases involving plant explosions, defective products and vehicle wrecks. “One of the things Wake Forest Law instills in its students is the importance of using their legal education to make  the world a better place,” Peggy Abrams says.

Jim Swisher (’61, JD ’62), a partner in Cahoon & Swisher in Greensboro, has served on the Board of Visitors and he has been a major contributor to the transformation of the Worrell Professional Center. His gift went to the Law Commons. His reason for that particular gift? The School of Law asked him. “The law school has done so much for me,” he said. “Whatever they asked me for, I would have done.” He remembers his years at the law school as golden ones, full of the excitement of being on a new campus, a sense of fellowship and a wonderful cadre of professors. “The professors knew you, they knew your name, they knew who you were. It was a real close-knit group.”

David (‘80, JD ‘82) and Pamela Furr recognized that the transformation of Worrell is crucial to Wake Forest Law’s success in attracting the best and brightest students. That’s why the Furrs made a leadership commitment to the building campaign. “If you want to be a top law school, you have to have the best professors and you have to look like the best law school,” David Furr said. “Wake Forest teaches you to dream, to think big and to really believe in yourself. You have to return some of what you’ve been given. I want to make sure there’s someone else out there who has the opportunities I did, because it’s been fabulous.”

The Brad (JD ‘78) and Carole Wilson Career and Professional Development Center is a key enhancement within Worrell. The Career and Professional Development Center will dedicate space for mentoring and employer recruitment visits, and also serve as a focal point for law students to develop professional and leadership skills. “We support Wake Forest University and the School of Law because of our strong belief in their approach to educating the whole person and preparing students to give back to the world,” said Brad Wilson. “We are grateful for what Wake Forest has meant to our family.”

Five years ago, then Executive Associate Dean for Academic Affairs Suzanne Reynolds (JD ‘77) and a dedicated faculty committee laid the foundation for a project that has since significantly changed the dynamics of the law school. The Pro Bono Project began as a concentrated effort to provide legal information to a community that was underserved and in some cases, uninformed about the legal process. Since its inception, the project has expanded significantly to meet the deans’ vision of developing citizen lawyers. The passion of our students and the commitment of the administration were recognized recently when the Pro Bono Project, in partnership with the law student veterans group VALOR, received the American Bar Association’s highest award for law school public service. Under the guidance of Outreach Director Professor Beth Hopkins, the Pro Bono Project and the Outreach Initiative continue to seek new horizons to reach those in need of legal assistance and to touch those who have lost hope in the legal system now from the new Smith Anderson Office of Community Outreach suite thanks to the generosity of the Smith Anderson law firm.

The Barkley Forbes Classroom has been donated by Marilyn Forbes (JD ‘81) to honor both sides of her family for their commitment to education — her mother is Jane Barkley Forbes and her father is Allen H. Forbes II. Forbes was inspired by her seventh-grade civics teacher to pursue public service. After graduating from Pennsylvania State University, she served as a VISTA volunteer in Kentucky, where she worked with Kentucky Legal Services helping lawyers represent people with black lung disease. “I loved it,” she said. “The idea that you could make significant changes with the law was inspiring.” That experience cemented her desire to go to law school. She chose Wake Forest for its small class size, and the chance to develop close relationships with students and faculty.

Gene Boyce (JD ‘56) graduated first in his class with one of the highest grade point averages in the school’s history. He began his career as an officer in the JAG Corps before taking a job at a law firm headed by I. Beverly Lake Sr., professor of law at Wake Forest University. When asked about his most memorable personal moment at Wake Forest Law, Boyce recalled the lessons he learned from former Wake Forest Law Dean Carroll Weathers. “He taught ethics and had that practical ethical experience in dealing with clients. I thought the world of him as an individual, as a lawyer and as a highly ethical person. He was wonderful,” Boyce said about Weathers. Boyce, who is an attorney for Nexsen Pruet in Raleigh, North Carolina, found those ethics came in handy when he was tapped to help those involved with Watergate learn more about court reporters and investigative reporters.

As the director of state history museums for the N.C. Department of Cultural Resources, Ken Howard (JD ‘82) knows a little something about the importance of preserving the past. That’s why he and his wife, Martha, chose to use their building contribution to create an an area in Worrell that displays the history of Wake Forest Law. “I think you’ve got to give back,” he said. “As a graduate of your institution, you owe them the responsibility of helping that institution continue.” The “Walls of Tradition” will grace the left and right entrances to the Law Commons and are on schedule to be installed in October. “Knowing the history of the school you attend can only make you appreciate what a special place that school is. The legacy of Wake Forest Law and the tradition of excellence that Wake Forest Law has maintained over these many years can only make any student proud that they graduated from the Wake Forest University School of Law.”

Terry Hutchens’ (MBA ’74, JD ’77) is grateful Wake Forest Law took a chance on him — an MBA student with a rather average undergraduate career. Hutchens, who counts a good work ethic and determination among his assets, launched his legal career in 1982 with a staff of seven. Today the Hutchens Law firm employs more than 250 attorneys and staff and has offices in Fayetteville, Charlotte and Wilmington. Hutchens has tried to return Wake Forest Law’s faith in him with a generous record of giving. That’s why and his wife, Rosalind, wanted a hand in creating the Wake Forest Law Hall of Fame, which will be located on the first floor hallways of Worrell. “It was a stretch, I know, for the law school to let me in. I was a real test,” he said. “I probably didn’t deserve to be there and they took a chance on me.  Wake Forest Law has had a big part in whatever success I have achieved.”