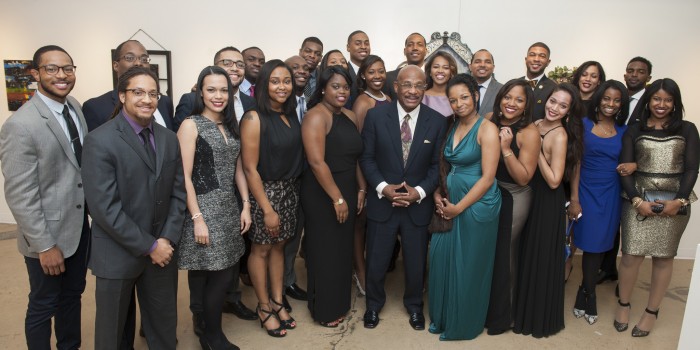 Renowned attorney Willie E. Gary, known across the country for his successful, multi-million dollar lawsuits against the likes of Disneyland and Anheuser-Busch, was the keynote speaker for this year’s 31st annual Black Law Students Association (BLSA) Scholarship Banquet on Feb. 12.

The BLSA Scholarship Banquet is an annual event held to raise money for scholarships, to present the BLSA legacy award and to award scholarships to three deserving students. This year’s theme was Fulfilling the Dream.

Dionne Jenkins, president of the Winston-Salem Bar Association, began by highlighting the progress made by BLSA over the past decades.

Gary embodied this theme of fulfilling the dream perfectly. He was one of 11 children, grew up in migrant communities in Florida, Georgia and the Carolinas and eventually obtained a full athletic scholarship to Shaw University in Raleigh so that he could attend college. He earned his Juris Doctorate in 1974 from North Carolina Central University and moved back to Florida to open his hometown’s first African-American law firm. The firm has grown into a highly successful business since then, and Gary has earned a reputation as “The Giant Killer” for taking down so many corporate giants on behalf of his clients. Gary’s keynote address centered around this theme, telling law students that hard work and determination were the keys to fulfilling their own dreams.

“To BLSA and the young, bright, up-and-coming lawyers and judges in this room: you can be whatever you want to be. There’s no question about that,” Gary said. “But you have to understand that nobody’s going to give you anything. There’s a price to be paid for whatever you receive in life, and if you’re willing to pay the price, to burn the midnight oil, then no mountain’s too high that you cannot climb it if you’re willing to dig in.”

In addition, Gary highlighted the importance of remembering those that came before and paved the way for the successes of today. He cited the lives of Martin Luther King Jr. and those who marched at Selma, charging students to honor their memories by succeeding, but also by remembering that no one succeeds on their own.

“A law degree is a very powerful degree. I know you want to make money and that’s fine, I like making a few bucks myself. But make the money, don’t let the money make you. Reach out and help somebody who’s less fortunate than you are,” Gary said. “You didn’t get the way you are on your own. So reach back and pull somebody along with you as you travel the ladder of success.”

After the keynote address, the leaders of BLSA presented the awards of the night. First they announced the BLSA Legacy Award, which is presented each year to a faculty member who best embodies dedication and commitment to the lives of black law students. This year, the award went to Professor Beth Hopkins, who attended Wake Forest University for her undergraduate degree and currently serves as the director of outreach for Wake Forest Law. Hopkins encouraged all BLSA students to remember their roots after graduation and to come back and visit Wake Forest Law whenever they could.

The three BLSA Scholarships were awarded to Briana O’Neil (’18), Candice Diah (’17) and BLSA Vice President Ashlee Johnson (’16), who had no idea during the planning of the even that she would be one of the scholarship recipients. To conclude the night, Dean Suzanne Reynolds (’77) delivered closing remarks, commenting that this was her first BLSA banquet as dean of Wake Forest Law.

“Year after year this is one of the highlights of the Wake Forest Law experience, chiefly because [the students] pour their hearts and souls into it. They do all this work so they can give all the money away,” Reynolds said. “That spirit of doing something for other people is what makes the BLSA banquet so special.”