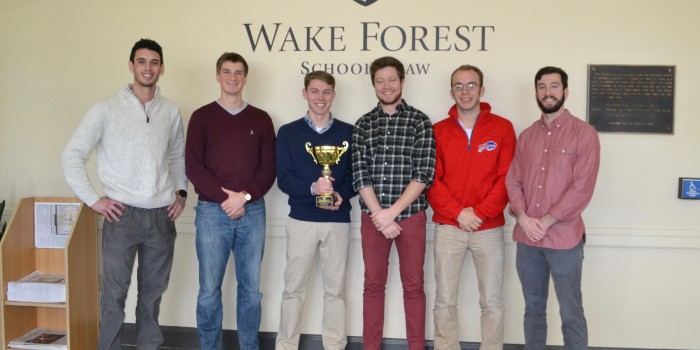 Joe Karam, John Allen Riggins, Mitchell Davis, Jon Salmons, Ryan Holt and Kyle Mirabelli (pictured here from left to right) competed against law schools from across the region at UNC-Chapel Hill School of Law. The team of six won four rounds of the competition, which sent them to the final round. They were awarded “Best Advocate” in each of the pre-final rounds and lost in a close contest to the team from UNC-Chapel Hill School of Law, whom they had previously defeated in the preliminary rounds.

The Kilpatrick Townsend & Stockton LLP First-Year Trial Competition is held annually in January at the UNC School of Law. The competition allows first-year law students interested in litigation to gain valuable trial-advocacy experience in a learning environment. Open to North Carolina law schools, the competition places focus on developing trial skills rather than knowledge of law which makes for an enriching event for all participants.