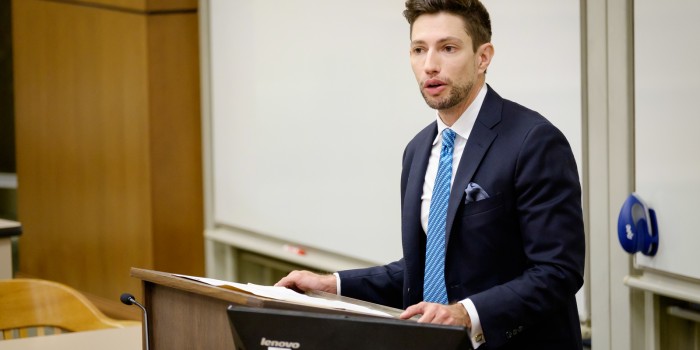 Professor Shannon Gilreath (JD ’02) was quoted in the following story originally published in The Washington Post on March 10, 2016, here.

Thursday night’s GOP debate certainly proved to be the most — to quote Donald Trump — “elegant,” but it belies the 11 preceding ones, not to mention the name-calling and sucker punches ever-present on the campaign trail. With readers flooding my email inbox with queries about how the GOP candidates stack up on issues that matter to them, specifically LGBT ones, it’s time to shift the focus away from what I call the “4Ms” (Mexicans and Muslims, McCain and Megyn).

With not one question about gay issues Thursday, voters might think marriage equality and LGBT non-discrimination are non-issues to this year’s crop of Republican candidates. Don’t be fooled by the silence. “Anti-LGBT vitriol is very much on the map,” Shannon Gilreath, a Wake Forest University law professor and expert on LGBT issues, said, “but it hasn’t figured very much in the debates.”

Brandon Lorenz, a director at the Human Rights Campaign, agreed: “In fact, the candidates have campaigned against LGBT equality over and over on the trail,” notably by saying they’d appoint Supreme Court justices to overturn last year’s marriage equality ruling.

In other words, what we’re seeing on the debate stage is not what’s playing out on the campaign trail. Which makes these candidate-themed questions even timelier:

Q: “I recently learned that Donald Trump’s embrace of anti-gay positions is as dishonest as most of his campaign. He was effusive when Elton John and David Furnish got married in 2005. Should this make me relieved that he probably won’t do anything awful if elected, or enraged that he would cynically spew hate to curry favor with his bigoted base?” — Robin W., San Francisco

A: The correct answer is B: Enraged. You’re right that Trump appeared to support same-sex marriage when Sir Elton married. At the time, he posted effusively: “I’m very happy for them. If two people dig each other, they dig each other. Good luck, Elton. Good luck, David. Have a great life . . . ” More recently, however, Trump has opposed same-sex marriage, and last month said he would “strongly consider” appointing Supreme Court judges likely to overrule the Obergefell v. Hodges decision.

If real estate mogul Trump supported marriage equality and candidate Trump is stoking anti-gay fires, it’s hard to tell what a President Trump would do or say.

Late last year, Gregory Angelo, president of the Log Cabin Republicans (which advocates for LGBT rights) argued that Trump “is actually the most pro-gay.” Even this week, Angelo told me Trump has given more than $30,000 to LGBT charities since 2012. I know Angelo meant that to be a sign of Trump’s gay-friendliness, but it turns out he made those donations out of obligation. The charities — the Gay Men’s Health Crisis and Gay, Lesbian and Straight Education Network — were selected by “Celebrity Apprentice” contestants. No doubt shaken by Trump’s recent statements on LGBT issues, the Log Cabin Republicans uploaded a video earlier this week asking: “Where do you really stand on marriage equality, Mr. Trump?”

Unfortunately, Trump’s flip-flopping is the good news compared with Texas Sen. Ted Cruz’s and Florida Sen. Marco Rubio’s consistent opposition to LGBT rights. Angelo called Rubio a “grave concern to me,” especially because he has assigned staffers to develop “a strategic plan to overturn Obergefell.” As for Cruz, Angelo doesn’t mince words: “He’s proactively taken steps to do harm to the LGBT community and our families.”

Yes, I would say B: enraged, is the right answer.

Q: Among all the Republican candidates, isn’t Gov. Kasich the most progressive when it comes to LGBT rights? — Name withheld

A: “I suppose he’s positive in his actual tone in the debates,” Gilreath said, “but if you look at his record and policies, he’ll slit your throat with a smile on his face.” It’s true that Ohio Gov. John Kasich has said he attended a friend’s same-sex wedding, and that he’ll “accept” the Supreme Court’s ruling. But that doesn’t make him LGBT-friendly. Kasich has also supported a Constitutional amendment banning same-sex marriage and as recently as last week reiterated his opposition to it. His gubernatorial record is clear: “Because of him,” HRC’s Lorenz said, “Ohio still lacks explicit nondiscrimination protections for LGBT Ohioans.”