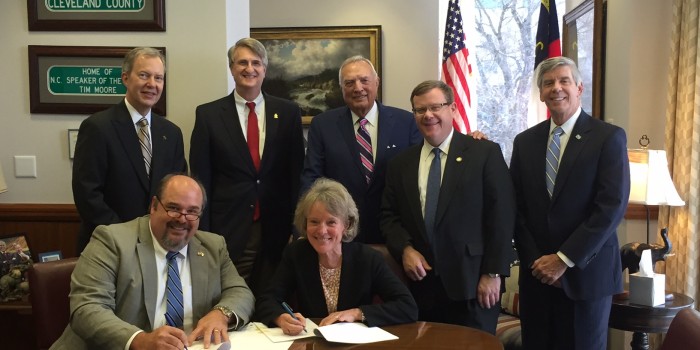 The Triad’s status as a hub for complex business law cases is set to grow following the state’s announcement that a new courtroom for the N.C. Business Court will make its home in Wake Forest University’s School of Law.

The expansion builds upon the foundation laid when the court was created in Greensboro in 1995, and mirrors the model in place at Elon University School of Law, which houses a business courtroom in its downtown Greensboro campus.

I caught up with Wake Forest Law Dean Suzanne Reynolds to find out how her school landed the new courtroom and what value she believes it will bring to the law school and its students.

The opportunity came with the passage of a state budget last year that called for the addition of a fourth location for the N.C. Business Court, which along with the main courtroom in Greensboro also has courts in Raleigh and Charlotte.

“The chief justice (Mark Martin) and Judge Marion Warren, the director of the N.C. Administrative Office of the Courts, believe that the volume warranted asking for money for a fourth business court, and the General Assembly agreed,” Reynolds told me.

With a larger number of cases being generated in the Triad, it made sense for the region to become home to the fourth courtroom, Reynolds said.

Wake was able to land the new court in part because of the success Elon has seen housing the courtroom, Reynolds said.

Business court is housed in county courthouses in Raleigh and Charlotte, but sharing space within a law school allows the court to serve a dual purpose, Reynolds said.

“One option was for it to be at another law school, so that it could serve educational purposes as well as serving the citizens of the state,” Reynolds said. “I think that’s the main reason Wake Forest ultimately got the nod. … Elon Law School has benefited so much from having a court in its school that Judge Warren, with input from the chief justice of the business court, Jim Gale, agreed that Wake Forest would be a great location for it.”

A subscription is required to read the full article, which can be found here at the Triad Business Journal’s website.