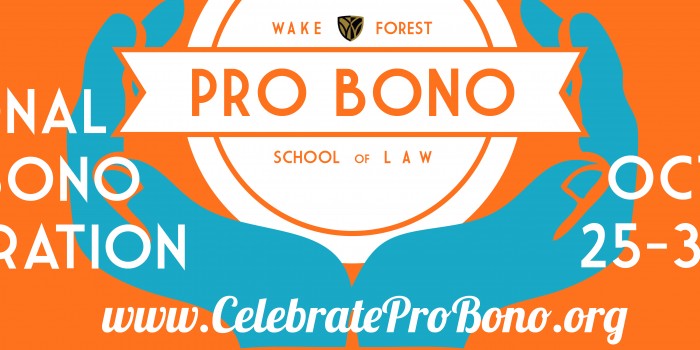 The Pro Bono Project is the recipient of the American Bar Association (ABA) Day of Service Award from the Law Student Division thanks in part to Wake Forest Law students’ dedication to pro bono legal services, especially during the ABA’s Pro Bono Week in October 2015.

The Pro Bono Project received this top honor as a result of the high number of students participating in this year’s Pro Bono Week. Wake Forest Law students logged more 200 hours of pro bono service during that week, according the ABA.

“We are honored that the ABA recognizes the compassion  and diligence of our dedicated student body,” said Professor Beth Hopkins, director of the law school’s Smith Anderson Center for Community Outreach. “This most recent recognition solidifies Wake Forest Law’s Pro Bono Project as a leader among law schools in the state and the nation.”

“The ABA Standing Committee on Pro Bono and Public Service chose to launch this important initiative because of the increasing need for pro bono services during these harsh economic times and the unprecedented response of attorneys to meet this demand,” states the National Pro Bono website. “The National Pro Bono Celebration can be an effective strategic tool for enhancing and expanding local efforts to increase access to justice for all.”

The Pro Bono Project was started during the 2009-2010 school year and is the central point for all pro bono activities at the law school and maintains a database to keep track of student pro bono work. The Pro Bono Project has filled hundreds of placements with attorneys in non-profit organizations, private practice and North Carolina’s legal services organizations. The program is administered by a student executive board with the support and assistance of the law school administration and partnerships with local attorneys and legal services organizations.