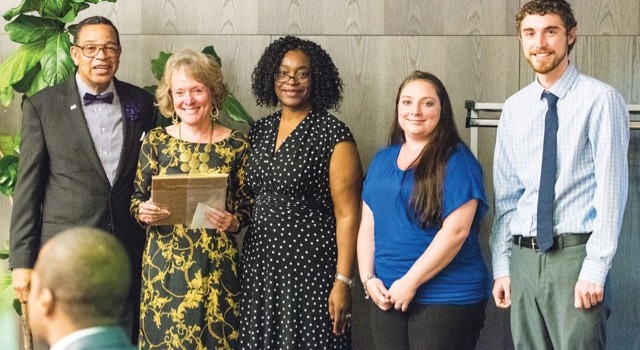 Erin Mizelle for the Winston-Salem Chronicle

Simmons and Dean Reynolds were presented with Community Service Awards, along with Paulette Lewis-Moore, the Rev. Kelly Carpenter, Bishop Todd Fulton and Elizabeth Speight. The Innocence and Justice Clinic, led by Rabil, was one of the recipients of the Organization of the Year award, along with the Winston-Salem Urban League.

The community service awards event was created to recognize those individuals who benefit the overall quality of life for the community, many of whom are often unsung heroes who go about their daily lives helping to improve the conditions of the city, according to Chronicle Publisher Emeritus Ernie Pitt.

The following article,  “The Chronicle Honors Community Servants”, by Tevin Stinson, was originally published in the Winston-Salem Chronicle on April 28.

Like the Dixie Classic fair, or the annual Christmas parade held downtown The Chronicle’s annual Community Service Awards has become one of the city’s most anticipated events.

Since 1985, Winston-Salem’s oldest and most-respected community newspaper has invited elected officials, business professionals, community leaders, residents and other stakeholders in the community to take part in the award ceremony designed to honor individuals throughout the area for their hard work and dedication to improving lives. Last Saturday evening, April 23, hundreds of people gathered at the Donald Julian Reaves Center on the campus of Winston-Salem State University for the 31st edition of he annual event.

Man of the Year honors went to the director of corporate and civic engagement at Reynolds American Inc., Alan Caldwell. Caldwell said, “I am truly humbled by being named man of the year. “I don’t do the things I do for recognition,” he continued. “I do it because it is the right thing to do.”

The Woman of the Year award went to the executive assistant to the chancellor and university secretary at Winston-Salem State University (WSSU), RaVonda Dalton-Rann. After accepting her award, Dalton-Rann thanked those she has worked with and encouraged those in atten-dance to become servant leaders. “It’s the servant leader who opens your door when you can’t open it yourself. It’s the servant leader who sees a struggle and is right there,” she said. “Those are the type of people whose shoulders I stand on today. Those are the people who brought me here.”

The Chronicle also made special tributes to the co-director of the Maya Angelou Center for Health and Equity, Ronny Bell, and WSSU associate professor of political science and former leader of the Black Panther Party, Dr. Larry Little. After accepting his award, Little gave an emotional speech on the importance of social justice before the hundreds in attendance. “When we talk about quality of life in this city, it must be inconspicuously connected with the quality of justice,” he said. Little noted that it was his first public appearance since the death of his dear friend Darryl Hunt last month.

“The people honored here today are attacking the issues head on and doing what has to be done to make this city a better place,” he said. Pitt mentioned the affair is simply a way to thank those in the community who go about their daily lives helping to improve conditions of the city.

Longtime Chronicle employee Paulette Lewis Moore was presented with a Community Service Award as well. The church of the year award went to Union Baptist Church. Mayor Allen Joines said he was honored to attend such an important event for the community. Joines also applauded The Chronicle for being the voice of reason for more than 40 years. “For years, The Chronicle has been the keeper of the holy grail here in Winston-Salem, and I know they will continue to be the voice of the community.”