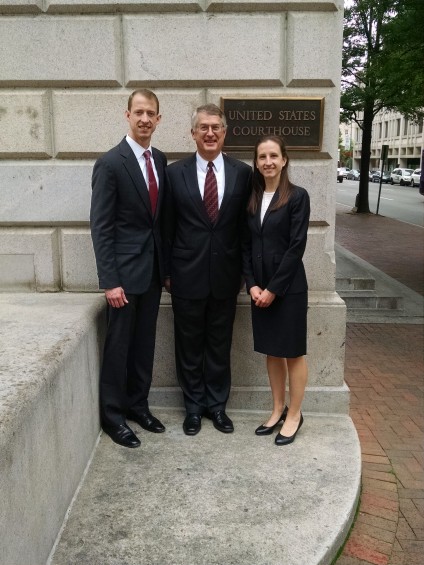 Ashley Escoe (JD ’16) and Rolf Garcia-Gallont (JD ’16) argued on May 10, 2016, in the United States Court of Appeals for the Fourth Circuit, in Richmond, Virginia, as part of the Appellate Advocacy Clinic.

Escoe and Garcia-Gallont argued as amicus in support of the defendants-appellees in the case of Andrews v. America’s Home Living Centers, LLC et al. The three-judge panel that heard the argument consisted of Chief Judge William B. Traxler Jr. of South Carolina; Judge Roger L. Gregory of Virginia; and Senior Judge Joseph F. Anderson Jr. of the United States District Court for the District of South Carolina, who was sitting with the circuit court by designation.

The defendants then moved for costs, including attorney’s fees, under Rule 41(d) of the Federal Rules of Civil Procedure. The district court allowed the motion, calculated the costs at around $13,000, and later dismissed the action when the plaintiff failed to pay the costs. The plaintiff appealed to the Fourth Circuit, which appointed the Wake Forest Law Appellate Advocacy Clinic to support the decision after the defendants were unable to afford counsel.

The appeal involves two issues:  (1) whether “costs” under Rule 41(d) may ever include attorney’s fees, and (2) whether the circumstances of the case support the award in this case. The first issue is an issue of first impression in the Fourth Circuit, and there is a three-way split in how other circuits have decided the issue. At the oral argument, Escoe and Garcia-Gallont split the time allotted to the appellees, with Escoe addressing the first issue and Garcia-Gallont addressing the second issue.  (They had similarly divided the research and drafting of the appellate brief, which was filed back in March, taking one issue each.)

A decision is expected later this year, according to Korzen.

With the arguments by Escoe and Garcia-Gallont, a total of six Appellate Advocacy Clinic students made appellate oral arguments during the 2015-16 academic year, a new high for a single year in the Clinic.