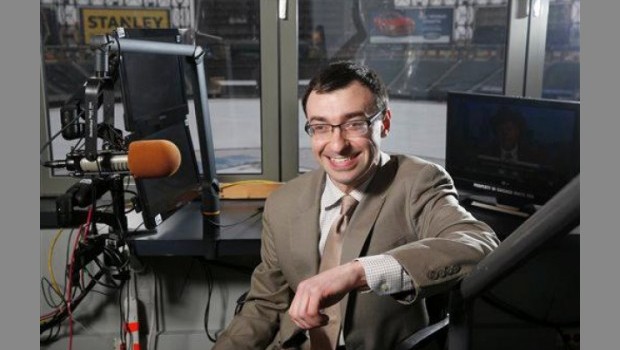 SYRACUSE, N.Y. — It happened more than a decade ago, but journalism professor John Nicholson vividly remembers criticizing verb tenses used by the sports department of Syracuse University’s radio station and the intense stare he got from Jason Benetti in return.

“He was polite. He stood up for himself,” said the director of the university’s Newhouse Sports Media Center. “I admired the heck out of him.”

Benetti developed that passion in college into his career. He worked for the Syracuse Chiefs minor league baseball team, and called baseball, football, lacrosse, hockey, and basketball for Time Warner, ESPN, Westwood One and Fox Sports. Now, at age 32, he has his dream job as the new member of the television broadcast crew for the Chicago White Sox — his favorite team. He has joined the White Sox as Savannah native and former major league All-Star player Ken “Hawk” Harrelson winds down his long career as a broadcaster.

Benetti’s accomplishments have come as he’s managed cerebral palsy throughout his life, giving him a pronounced limp and a lazy eye.

Benetti was born 10 weeks premature. He contracted a virus and lung disorder that required the aid of an oxygen machine, and his parents, Rob and Sue Benetti, didn’t know if they’d be able to bring him home from the hospital. When they did, it was a struggle.

He had to have surgeries on both legs and was in a wheelchair at the beginning of second grade.

“All the kids liked to push me around in the wheelchair, which was fun,” Benetti said wryly. “Generally, it was a comfortable childhood.”

Things got tougher in high school, where kids want to be cool and don’t always react well to people with physical disabilities.

“When you’re the guy that’s walking around with a limp, it’s not easy to be cool and people don’t necessarily gravitate toward you like they would, say, the quarterback of the football team,” he said. “It wasn’t necessarily the coolest thing ever to be around a guy who did radio or band or walked with a limp — I happened to do all three.”

Playing tuba in the high school band helped Benetti find his niche. At football games, the school band tried to perform with Benetti stationary with his tuba on a stand while everyone else rotated around him. “That didn’t exactly work out. It’s a little odd. It draws attention to you,” he said.

The band director had a better idea — play-by-play announcer for the band. Benetti grabbed a microphone and started announcing what the band was playing. “That’s when I found that I had some interest in doing that,” he said.

After finishing college in 2005, Benetti quickly landed the job with the Chiefs, the Triple-A affiliate of the Washington Nationals. When Chiefs play-by-play announcer Bob McElligott departed the next year, Benetti replaced him.

“Here’s this guy that has a physical disability, but he’s working harder than anybody in the whole place. He’s driven,” said John Simone, the team’s former general manager. “Other than his disability, he’s not any different than any of us. He’s probably smarter than all of us.”

Benetti got a dose of exposure when Washington phenoms Stephen Strasburg and Bryce Harper passed through Syracuse and national media descended on Alliance Bank Stadium to chart their progress. Benetti was everywhere, ready to accommodate every request.

But that wasn’t quite enough. In his spare time, Benetti did college basketball for ESPN, studio work for Notre Dame football, high school football for Time Warner Cable, taught television broadcasting at Newhouse, and also performed some disability policy research work for the Burton Blatt Institute at Syracuse.

And he regularly flew back and forth to North Carolina to attend law school at Wake Forest University. Yes, he has his degree.

“You never know when somebody is going to have something taken away from them. I can get hit by a bus tomorrow,” Benetti said. “You might as well live life to the fullest while you have the opportunity.”

Benetti says he never wanted to be an activist about disabilities because it’s never been his personality. Still, because of what he’s accomplished he’s well aware that he’s an example of how to manage tough circumstances. That hit home several years ago after he spoke to a group of Paralympic athletes in Florida.

“To be visible and to bring some amount of joy and hope to a large group of people that has some sort of disability, to be able to do that and have that be a portion of a legacy whenever I leave the Earth, I have to. I have to,” he said. “I’ve got to show that it’s OK to look a little bit different and be on TV. I think that’s part of why I’m here.”