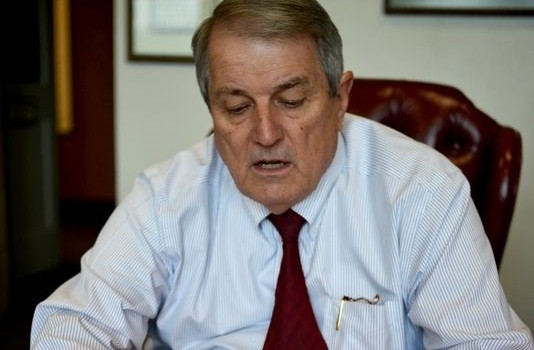 Judge Marvin Pope (JD ’73), the resident Superior Court judge in Buncombe County, North Carolina, introduced the state’s second Veterans Treatment Court earlier this spring, one of only 227 in the country.  His work is profiled in the article, “Living Portrait: Judge Marvin Pope,” written by Kora Manheimer and published originally in the Asheville Citizen-Times on May 27, 2016.

For the month of May, photographer Kora Manheimer looks at those involved in justice in Veterans Treatment Court. This is one of the newest programs to be introduced in Buncombe County, with the goal of restoring veterans who have gotten into legal trouble to lawful compliance and successful citizenship.

“Let me give you just the facts. In criminal Superior Court, for every person that I sentence to go to prison, 60 percent of them will be recidivist when they come out. Drug Treatment Court has a great success of recidivism, at only 30 percent. Of the 227 in the country, Veterans Treatment Court has less than 3 percent recidivism rate.”

If you’ve ever wondered if all the hard work that goes into this or other specialty courts is effective, there’s your answer. Judge Marvin Pope considers these to be great results. “It’s proven to be a very successful type of specialty court.” he said.

But there’s another side to it as well. “The big thing is it saves so many lives. Eighteen to 22 veterans commit suicide a day in the United States and that is a horrible statistic. And I have talked to veterans that have contemplated suicide and they’ve been involved in Veterans Treatment Court and turn it around,” Judge Pope explained.

A few years ago, Pope, who is the resident Superior Court judge in Buncombe County, read an article about the first veterans court in Buffalo, New York. He started advocating for it here, having always been interested in veterans and veteran affairs, taking part in the HonorAir group that takes vets of World War II and Korea to Washington, D.C. His father was a veteran, and multiple family members.

Pope has been a judge for 16 years, and practiced law for 28 years before that. He credits Steve Cogburn with help in getting this specialty court started. “He was very instrumental in getting the governor’s crime commission to give us a grant to start a Veterans Treatment Court. We put the team together, we had tremendous response, positive response from the DA, we have a memorandum of understand with them and state agencies that support veterans also.”

Then it was time to hit the road. “We went to training in California, Washington, D.C. and Rochester, New York, and now we’re a certified Veterans Treatment Court. There are only 227 of them in the country, we’re the third one in North Carolina. The first is a district court in Harnett County, the second Cumberland County, a district court there, which started a week before we did last June. We’re Superior Court — we can handle all misdemeanors and we can do all felonies.” he explained. “Now, a Veterans Treatment Court does not do any sex offense cases, violent felonies like bank robbery and things like that,” he stated.

As far as the structure, it’s a total team effort. It’s based on the military platoons system with a commander, the judge, your fire support team of the DA, the public defender, the probation officers, the veteran administration coordinator, and then the veteran clients that are the troops. This non-adversarial approach has all the discipline of the military structure and is challenging.

“It’s much harder to do Veterans Treatment Court than to go to jail. It’s easier to go to jail – and get three square meals a day and come out and know how to commit other crimes – than it is to go through these various programs, these group treatment sessions and everything else,” Pope explained.

“They are motivated to do it. Charges are dismissed so they have a clean record at the end – we can’t dismiss all charges, if it’s a DWI we can’t dismiss that, but we can help them deal with the problem and that’s the big thing – solving the problem,” he continued.

But what about the cost of courts like this? They seem to work and be of great benefit to all involved, include the community. So why not have more of them? “Specialty courts really work. The problem that we’re having in getting more or even getting support for the ones we have is there are folks in the Administrative Office of the Courts and the legislature that say, specialty courts are fine but you need to provide them for every county in North Carolina.” Judge Pope tell me.

“Well, you can’t do that because you don’t have the resources. It takes money to run a court like this. It cost right at $2,500 to $2,600 for each client here in Veterans Treatment Court.” he said.

A lot of counties do not have the population or resources. Asheville has the VA, and the court here is able to take veterans from all over Western North Carolina, serving the whole area. Some folks haven’t bought into the idea – some district attorneys say we don’t need another court, and veterans shouldn’t be treated differently, equality in the law. But the numbers are clear – if the goal is to reduce criminal activity and restore people to positive members of the community, the efforts are worthwhile.

Compare that to the cost to house that same inmate in the North Carolina prison system — $28,000-$36,000 per year. And the effects on the inmate, and by extension our communities, “When they go to jail, they learn how to lift weights, they learn how to get involved in other crimes, they sit around and play cards. It’s absolutely no benefit to them — except to keep them off the streets. We’ve built so many jails and we fill them up and it’s not helping,” Pope pointed out.

Pope finds this to be some of the most rewarding work of his career. Looking back on how he started, “The judge thing came about totally unexpectedly. Governor Hunt created a new judgeship in Buncombe County for another district court judge and asked me if I would accept that position, and I thought that it was time for me to give back to the community. I was born here in Asheville, and I practiced [law] 28 years, came straight out of law school back to town and opened up my own practice. Practice of law was very good to me, and I thought, the governor asked you to do this, do it. That’s how I became on the bench and I never regretted it a day in my life, I love it. It’s the best job in the world.” he told me. “As long as I’m a judge, I’ll do Veterans Treatment Court. As long as there’s a breath in me I want to serve these veterans and help them out in any way I can. We’ll have the team and we’ll do it whether the legislature supports us or not, we’ll do it.”