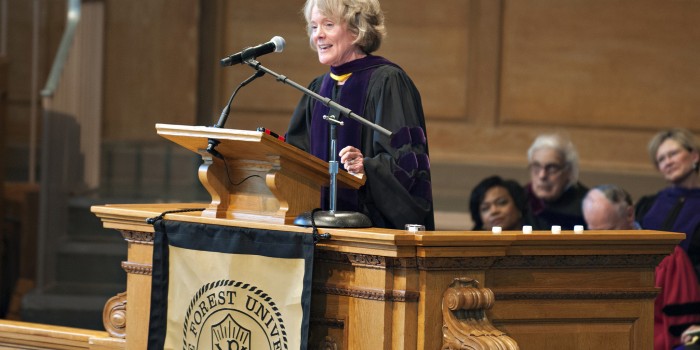 The law school’s 42nd annual hooding speakers, Professor Rebecca Morrow and Nkonge, were chosen by the Class of 2016 as the faculty and student speakers to address the class at Hooding. Professor Morrow was also named by the class as Professor of the Year with Ann Robertson, clinical coordinator for the Litigation Clinic, named as Staff Member of the Year.

Professor Morrow talked about the Class of 2016′s stunning accomplishments including winning national Moot Court and Trial teams, fulfilling impressive clinic work and earning an American Bar Association award for its pro bono.”I have been so impressed with this class. You are smart, you are good to each other, you are rich in kindness, you are funny and generous and a delight to be around. You have made WFU Law School a better place and we will miss you.”

Nkonge thanked the faculty, staff and administrators of the law school as well as the adjunct professors and Trial Team coaches. “I can confidently say we are prepared because of your personal investment in us. This class has an innate warmth and the legal profession needs legal minds who have compassion and who can give advice. We learned how to think like lawyers from our professors, how to act like lawyers from our trial team coaches and others and we learned from each other the kind of lawyers we want to be.”

You can listen to both speeches at http://livestream.com/wfu/2016law

Dean Suzanne Reynolds (JD ’77) said, “It is a time of abundant joy for your families and your law school family and we join you in celebrating. I know the Class of 2016 is a standup group and you all have been terrific supporters of me.”

Executive Associate Dean Timothy Davis administered the oath and congratulated the class of 2016, which received a standing ovation from family and friends in the audience. “Your legal education has been distinctive,” he said.

Professor Kate Mewhinney conferred the hoods. Following the placing of the hoods, Dean Reynolds recognized the moms, dads and “long-suffering spouses and children,” among others, for their support of the law graduates.

A diploma ceremony will be held in Wait Chapel on Monday, May 16, following Commencement exercises on Hearn Plaza.

• Diana C. Castro of Westin, Florida, received the American Bar Association and Bloomberg BNA Award for Excellence in the Study of Health Law.

•  Alexis Marie Iffert of Effingham, Illinois, received the American Bar Association and Bloomberg BNA Award for Excellence in the Study of Labor and Employment Law, which is given to the students who achieve the highest grade in the course.

• Joseph Boyd Greener of Great Falls, Virginia, received the Dean’s Award, which is given to honor the extraordinary contributions of a student leader.

• John Ira Sanders of Blackstock, South Carolina, received the E. McGruder Faris Memorial Award, which is given to the student exhibiting the highest standards of character, leadership and scholarship.

• Dawnielle Yvett Grace of Winston-Salem, North Carolina, received the Forsyth County Women Attorneys Association Award, which is presented annually to an outstanding female graduate based upon her academic achievements, leadership, service to community, professionalism and commitment to the legal profession.

•  Alena Baker Mosier of Pittsburgh, Pennsylvania, received the Laura J. Gendy Award, an award that was established by alumni, family and friends of Laura J. Gendy (JD’ 00) to provide an annual cash award to a graduating law student who exemplifies integrity, compassion for others and strength of character that were the hallmarks of Gendy, who died in August 2008.

• Catherine Heller Law, Jordan Crosby Lee, Joshua P. Bussen and Zabrina Barbosa Delgado received the Robert Goldberg Award in Trial Advocacy, which honors the memory of Robert Goldberg, a student at the School of Law, who was killed in World War II. It is an annual cash award given to the students showing the highest aptitude and ethics in trial advocacy.

• Andrew James Kilpinen of Indianapolis, Indiana, received the I. Beverly Lake Award, which was established in honor of I. Beverly Lake Sr., professor of law at Wake Forest University, practicing attorney, assistant attorney general of North Carolina 1951-1955, and retired Justice of the North Carolina Supreme Court. An annual cash award is given to the student or students in the law school exhibiting the greatest proficiency in the study of Constitutional Law.

• Kelly Jean Austin of Stafford, Virginia, received the Smith Anderson Pro Bono Award for Exceptional Service, which is presented annually to a student who is a Pro Bono Honor Society member, whose pro bono service must have resulted in a demonstrated impact on increasing access to legal information to the under-served population.