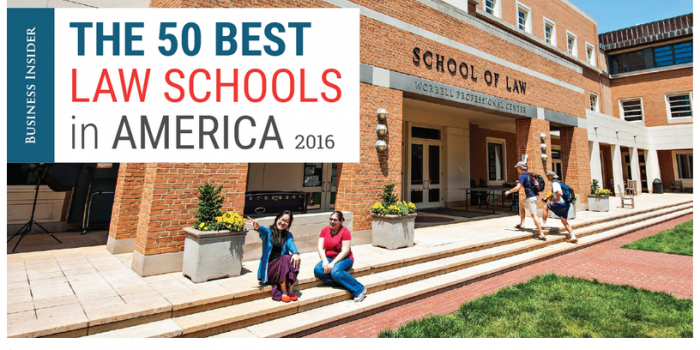 Business Insider, the third highest-read blog, ranked Wake Forest Law among “The 50 best law schools in America” on July 25, 2016, in the following article by Emmie Martin and Tanza Loudenback.

To determine which law schools stand as the best in the country, Business Insider focused on the institutions that lead to top jobs in the legal world. Using data from the ABA, the ranking primarily homed in on the percentage of graduates who land full-time, long-term, highly coveted jobs, which includes positions at big law firms that pay well — those with over 251 employees — and federal clerkships, which are difficult to secure and frequently set up successful careers.

The ranking also took into consideration the percentage of graduates with full-time, long-term jobs that require passing the bar, the percentage that are unemployed but seeking employment, bar-passage rate, tuition, and median LSAT scores. You can read more about our methodology here.

Placing a higher weight on jobs — and no weight on selectivity or reputation — yielded unexpected results. The University of Pennsylvania earned the top spot, followed by the University of Chicago at No. 2. The law programs at Yale and Harvard, perennially ranked Nos. 1 and 2 in other rankings, came in 10th and third, respectively.

Continue on to check out the full list here.

The ranking was also reported in the Triad Business Journal article, “Wake Forest University School of Law lands on top 50 list,” on July 26, 2016.