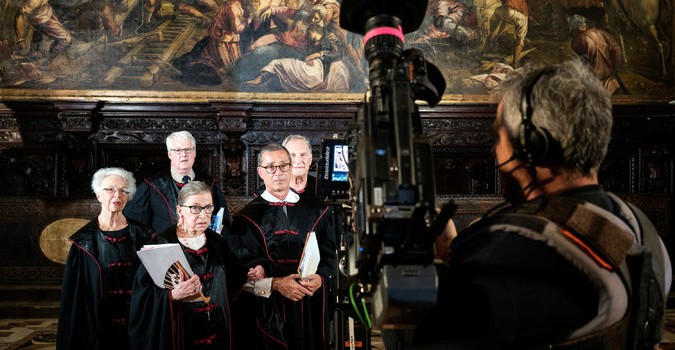 Professor Richard Schneider, Associate Dean for International Affairs, is featured in the New York Times article, “Justice Ruth Bader Ginsburg Presides Over Shylock’s Appeal,” for his contributions to a “Merchant of Venice” project with U.S. Supreme Court Justice Ruth Bader Ginsburg this week in Venice.  The article, which follows, was published by Rachel Donadio on July 27, 2016.

VENICE — What do Supreme Court justices do on their summer vacations? For Justice Ruth Bader Ginsburg — longtime liberal standard-bearer, recent Donald J. Trump critic — this year’s answer is: Go to Venice, watch your grandson perform in a production of “The Merchant of Venice” and preside over a mock appeal of the city’s most notorious resident, Shylock.

And so, on Wednesday afternoon, in the monumental 16th-century Scuola Grande di San Rocco, beneath ceiling paintings by Tintoretto, Justice Ginsburg and four other judges, including the United States ambassador to Italy, John R. Phillips, heard arguments on behalf of Shylock and two other characters, before reaching a unanimous ruling.

“I’d describe it as fun,” Justice Ginsburg said of the coming mock appeal in an interview on Tuesday, in which she talked about Venice, which she first visited on her honeymoon in 1954, and Shakespeare, whose work she loves — but not about Mr. Trump, weeks after she said she regretted her remarks criticizing the man who is now the Republican presidential nominee.

The mock appeal began where the play ended: Shylock, the conniving Venetian Jewish moneylender, insists on collecting a pound of flesh from Antonio, who has defaulted on a loan. But a judge, actually Portia disguised as a man, finds Shylock guilty of conspiring against Antonio and rules that he must hand over half his property to Antonio and the other half to the state.

Antonio says he will forgo his half, on the condition that Shylock convert to Christianity and will his estate to Jessica, Shylock’s wicked and rebellious daughter, who has run off to Genoa with Lorenzo, a Christian. Shylock, humiliated, agrees.

After about two hours of arguments and about 20 minutes of deliberations, the judges issued a unanimous ruling: To remove the question of the pound of flesh — “We agreed it was a merry sport, and no court would enforce it,” Justice Ginsburg said — to restore Shylock’s property, to restore the 3,000 ducats that he had lent to Antonio, and to nullify the demand of his conversion. 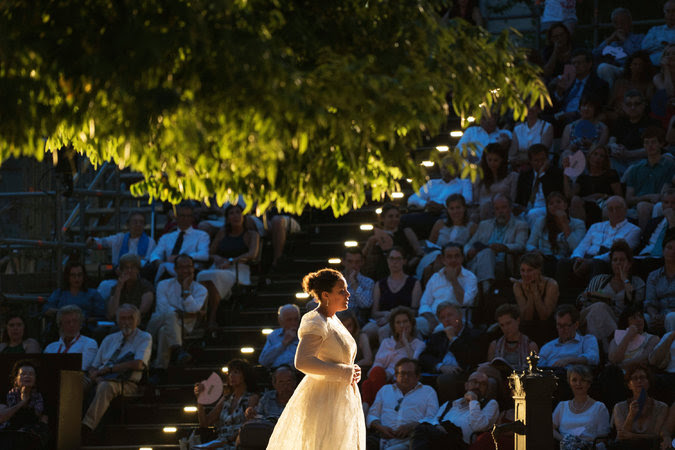 Linda Powell in a performance of “The Merchant of Venice.” Credit Alessandro Grassani for The New York Times

“The conversion was sought by Antonio,” Justice Ginsburg said. “The defendant in the case was decreeing the sanction. I never heard of a defendant in any system turning into a judge as Antonio did.” She added, to laughter, “And finally, after four centuries of delay in seeking payment, we think that Shylock is out of time in asking for interest.”

The court was not unanimous in what to do with Portia. The judges ruled that because Portia was “an impostor,” a “hypocrite” and “a trickster,” she would be sanctioned by having to attend law school at the University of Padua, where one of the judges, Laura Picchio Forlati, taught. Then she would have to pursue a master of laws degree at Wake Forest University, where another of the judges, Richard Schneider, is a professor and dean.

Mr. Schneider said it wasn’t daunting to share the bench with Justice Ginsburg. “Because she was wonderful and welcoming,” he said.

The audience was gripped, even in sweltering heat. “It’s an intellectual version of reality television,” said Dominic Green, a Shakespeare scholar and professor at Boston College, who attended.

It was an all-star Shakespeare event. Before deliberations began, F. Murray Abraham recited the “hath not a Jew eyes?” speech. While the judges deliberated, the Shakespeare scholars Stephen Greenblatt and James Shapiro discussed the play.

The mock appeal was linked to a production of “The Merchant of Venice” being staged in the main square of Venice’s Jewish ghetto, performed by the New York-based Compagnia de’ Colombari, part of a series of events this year marking the ghetto’s 500th anniversary.

Justice Ginsburg said she’d become involved in the mock appeal after learning about the “Merchant of Venice” production from friends who spend time each year in Venice, including Judith Martin, who writes as Miss Manners, and the mystery novelist Donna Leon. (Asked who had paid for her visit, the justice said she had come to Venice after speaking at a conference hosted by New York University in Barcelona.)

Justice Ginsburg and her fellow jurists before contemplating Shylock’s fate. The mock appeal began where the play ends. Credit Alessandro Grassani for The New York Times

Over the years, Justice Ginsburg has presided over several other mock Shakespeare appeals. “In the one I like most, the question was whether Hamlet was competent to stand trial for the murder of Polonius,” Justice Ginsburg said. “My judgment was, yes he was. But not only Polonius, but the grand jury should consider whether he should be indicted for Ophelia’s death.”

After Justice Ginsburg expressed interest in a mock appeal, the play’s director, Karin Coonrad, did a Skype audition with the justice’s grandson, Paul Spera, an actor who lives in Paris. She cast him as Lorenzo, who runs away with Jessica, Shylock’s daughter.

“He’s very, very good,” Justice Ginsburg said of her grandson’s performance. “I admit to being a little prejudiced on the subject, but I thought he was wonderful.”

Mr. Spera, 30, said his grandmother had noticed that they had cut two lines from a famous scene with the refrain “In such a night as this.” “My bubbe was a little disappointed by that,” Mr. Spera said after opening night. Yes, he said, he calls her “bubbe,” the Yiddish term for grandmother.

There had been some controversy among Jews in Venice about performing such a problematic play. “When I was going to school, ‘The Merchant of Venice’ was banned because it was known as an anti-Semitic play,” Justice Ginsburg said. She said she agreed with the assessment. “That’s what Shakespeare meant it to be,” she said. “Shylock is a villain. He’s insisting on a pound of flesh. He’s sharpening his knife.”

Shaul Bassi, a professor of Shakespeare at the University of Venice and a key organizer of the mock trial and the play, sees it differently. “It’s not an anti-Semitic play, it’s a play about anti-Semitism,” he said. Mr. Bassi, a co-founder of the nonprofit organization Beit Venezia, said he hoped the production would show the ghetto as a meeting place of cultures. “This is an incredible opportunity to rethink this place,” he said.

The Jewish community of Venice, which numbers 450 people, is raising funds to restore the five synagogue buildings on the ghetto’s main square, which are crumbling after lack of maintenance, and to reimagine the Jewish Museum. “It’s not a mausoleum, it’s not a look at the past,” said David Landau, who leads the community’s restoration committee.

Back at the mock trial, after the judges wrapped up, the last word didn’t go to Justice Ginsburg but to Arrigo Cipriani, the owner of Harry’s Bar, which sponsored a cocktail reception after the ruling. Justice Ginsburg entered to applause, and was promptly handed a Bellini.