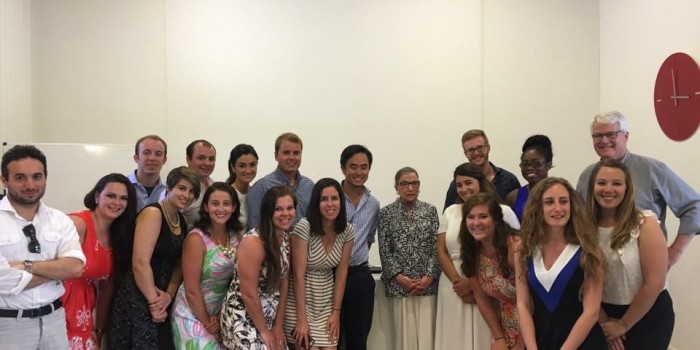 Wouldn’t you agree that the losing litigant in a trial rife with falsities and error — from an imposter judge to undeniable anti-Semitism — deserves an appeal?  After a verdict resulting in a forced religious conversion and the surrender of wealth and property, and the passage of more than 400 years, Shylock, the hard-hearted moneylender from Shakespeare’s controversial comedy, “The Merchant of Venice,” has been granted an appeal.  His appeal has been briefed and will be argued in his native Jewish Ghetto of Venice.

On July 27, 2016, at the intersection of the 500th anniversary of the formation of the Jewish Ghetto in Venice and the 400th anniversary of Shakespeare’s death, a mock appeal hearing will be held in Shylock’s case. The judicial panel hearing the arguments will consist of none other than the Honorable U.S. Supreme Court Justice Ruth Bader Ginsburg and Wake Forest Law’s Professor Richard Schneider.

“This is the kind of thing that only happens once,” said Professor Schneider.

The mock hearing, which was organized by Professor Schneider at Justice Ginsburg’s request, is part of a series of events hosted by Compagnia de’ Colombari and Ca ‘Foscari University of Venice.  Other events include symposia, lectures by Shakespeare scholars Stephen Greensblatt of Harvard University and James Shapiro of Columbia University, receptions and a six-performance production of “The Merchant of Venice.”  Under the direction of Karin Coonrod, an international cast will perform the work in English and other languages outdoors in the Campo di Ghetto Nuovo, or the Jewish Ghetto of Venice.  This marks the first time the play will be performed in its historic, famous setting.

Students in Professor Schneider’s summer Law, Literature, and Culture course, which addresses “The Merchant of Venice” and other Italian literature, will accompany Professor Schneider to Venice and participate in several of the events.  Students will observe the oral arguments and attend a reception with the involved dignitaries, such as U.S. Ambassador to Italy John R. Philips, another member of Shylock’s jury, and Justice Ginsburg.

Justice Ginsburg, who has participated in a number of mock appeals and hearings, will also spend a day with the students and lecture on the high court and its work.  She will discuss recent decisions and the ins and outs of the high court as she has done twice before for Professor Schneider’s class in Venice.  According to Professor Schneider, her affiliations with Wake Forest are well-known in Venice.

Also affiliated with Wake Forest’s Venetian programs is Shaul Bassi, who hatched the idea to celebrate the confluence of the two anniversaries and coordinated the mock hearing.  Bassi is an associate professor at Ca’ Foscari University and the co-founder and director of Beit Venezia: A Home for Jewish Culture, an arts and education project that promotes Venice as a center of Jewish knowledge and creativity, according to its website.  Bassi is also a faculty member at Casa Artom, the Wake Forest Venice campus for undergraduate students.

Aside from “The Merchant of Venice”-related events, Professor Schneider’s students’ Venetian experience will be furthered by sharing a classroom with University of Padua law students.

Some of this difference stems from different legal systems.  The United States is a common law country, but Italy is a civil law country.  Similarly, many of the Italian students’ literary education more heavily emphasizes old works, like those of Dante and Giovanni Boccaccio, according to Professor Schneider.

Professor Schneider decided to incorporate a number of old literary works into his organization of the mock hearing.  Instead of applying modern human rights laws, the judges will focus on the laws and works of literature available during Shylock’s original trial, such as Aristotle, Michel de Montaigne and Boccaccio.

“It’s actually more interesting if we just show how, even at the time, Shylock could have been exonerated. There was a lot out there that if had been applied, could have given a much more humane outcome,” Professor Schneider explained.

Nevertheless, it will be up to the lawyers to determine how and on what laws and literature their arguments will be formed.  Each of the three Italian attorneys will prepare a 15-minute argument based on four human rights-oriented questions Professor Schneider gives them. From there, the judges will determine if Shylock prevails.

“I think this will be really an amazing opportunity for students to think about the intersections of law and literature. Because a part of law is telling a story, telling a narrative and getting people to believe it,” Professor Schneider said.  “That’s also the heart of literature.”

This story was featured on The Huffington Post blog in Lisa Snedeker’s entry, “Ruth Bader Ginsburg Hears A Different Argument,” on July 27, 2016.