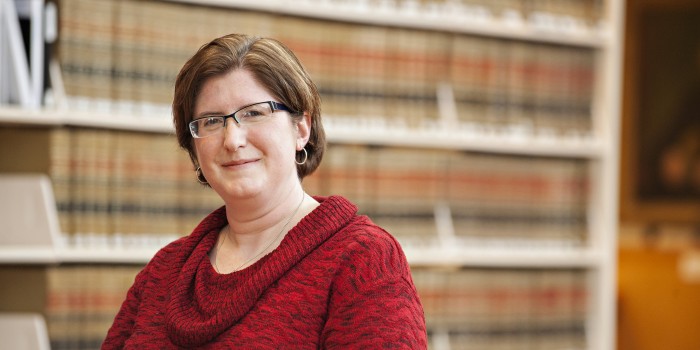 Professor of Law Tanya Marsh, an expert in human remains, created the first Funeral and Cemetery Law course in an American law school.

Professor Tanya Marsh explains the difference between savings and loans and banks to Claes Bell, CFA, a Bankrate.com writer in the following article, which was originally published on Aug. 15, 2016, and was also picked up by Yahoo Finance.

If your holiday traditions include watching Jimmy Stewart learn that “It’s a Wonderful Life,” you probably remember the plucky Bailey Bros. Building and Loan Association and how it financed hundreds of single-family homes in good old Bedford Falls.

But while they’re not as common as they used to be, savings and loan associations, or “thrifts,” still play an important role in many Americans’ financial lives.

The biggest difference between a thrift and a conventional bank is that thrifts are designed to serve U.S. consumers rather than businesses. By law, thrifts must have 65% of their lending portfolio tied up in consumer loans, says Tanya Marsh, professor of law at Wake Forest University in Winston-Salem, North Carolina.

RATE SEARCH: Get a great rate on your savings by shopping money market accounts

A typical consumer probably won’t notice a lot of obvious differences between a thrift and, say, a community bank. Like community banks, thrifts are generally smaller, local institutions and don’t have the reach or resources of a large national bank like Chase or Bank of America, Marsh says.

Thrifts offer customers many of the same deposit products you can get at a bank, such as checking accounts, savings accounts and certificates of deposit, as well as credit products such as home and auto loans and credit cards. Just as with a bank, all your deposits up to $250,000 are backed by the full faith and credit of the U.S. government through the Federal Deposit Insurance Corp.

From a consumer perspective, thrifts do have a big advantage over banks: higher interest on customers’ savings.

“Because thrifts can borrow money from the Federal Home Loan Banks at a low rate of interest, that usually translates into higher rates of interest on savings accounts at thrifts as compared to commercial banks,” Marsh says. “That’s been, traditionally, one of their benefits.”

What thrifts don’t do

“If you walk into a savings and loan or thrift branch, versus a commercial bank, the product set is going to be a lot simpler,” Rabatin says.

That means you’re likely to find fewer types of accounts and less in the way of wealth management, foreign exchange and insurance products and services than you might find at a conventional bank.

Standing up for the little guy

Thrifts have been around for a long time, starting out as “building societies” in the United Kingdom in the late 18th century and eventually making their way to the United States. 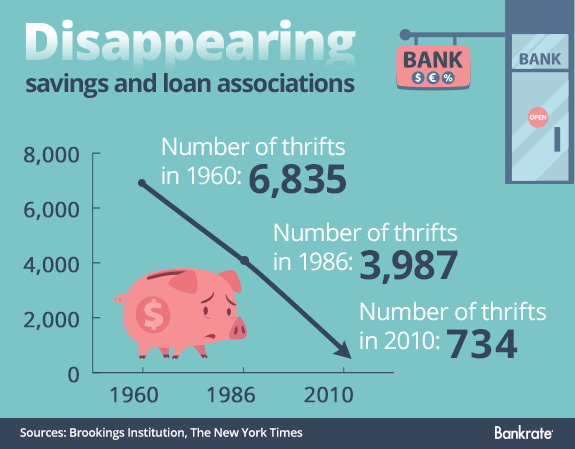 The depiction of thrifts in that old movie “It’s a Wonderful Life” is in some ways fairly accurate. Whether they were mutual (owned by their customers) or corporate (owned by shareholders), they served one main purpose in the U.S. economy: making sure working-class people could get mortgages to buy single-family homes.

Millions of Americans in the postwar era bought homes with loans from thrifts; at one point in the postwar period, they were making the majority of mortgages in the U.S., Cole says.

That changed when the deregulation of the financial services industry, followed by a wave of failures in the 1980s, decimated thrifts.

“The thrift industry has not recovered from the SandL (savings and loan) crisis decades ago,” Wake Forest’s Marsh says.

RATE SEARCH: Search today for an interest checking account nearby.

May be harder to find in the future

These days, the lines between thrifts and conventional banks have blurred, Piper Jaffray’s Rabatin says. Savings and loan associations are moving more into commercial lending and construction, and an increasing number are converting to conventional banks.

Also, many of the advantages thrifts used to get, including less stringent regulation, have been eliminated over the years, most recently by the Dodd-Frank financial reform law.

“I don’t know why anyone would start a thrift today,” Marsh says. “People are loyal to local institutions, so some of them can hang on. But this is a rapidly consolidating industry overall.”