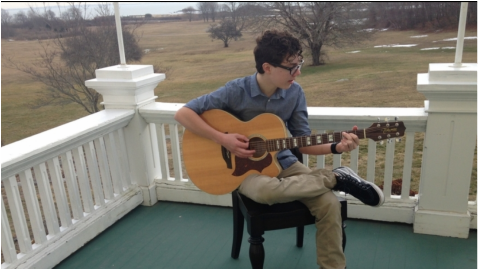 Braiden Sunshine, a finalist a couple of seasons ago on NBC’s hit music competition “The Voice,” is scheduled to participate in a benefit for the Children’s Law Center (CLC) of Central North Carolina’s first-annual Birthday Blast.

The benefit is set from 6:30-8:30 p.m. on Thursday, Sept. 15, 2016, at The Millennium Center 101 West 5th St., in downtown Winston-Salem. Sunshine is the nephew of Iris Sunshine (JD ’89), the executive director of CLC and the director of Wake Forest Law‘s Child Advocacy Clinic, which is housed at the CLC.

Braiden Sunshine, who is now 16, will perform a couple of sets during the benefit before mingling with guests.

“I think I am going to play mostly original songs,” he said in a phone interview after visiting a middle school near his home on Friday. “It’s going to be a lot of fun because I get to do my favorite acoustic stuff and some some stuff from ‘The Voice.’”

The Massachusetts high school junior who skyrocketed to fame after making it to the quarter-finals of the competition says he has been spending a lot more time encouraging others to go for their dreams and making music these days. “The show has jump-started a career for me and I have played with my favorite band of all time, Blues Traveler, three times,” he said. “It made my dream of being a career musician attainable. Beforehand it was just something for fun to do.”

The theme of the birthday blast is “A Voice for Children,” which reflects CLC’s mission, according to organizers, who add that Braiden Sunshine is passionate about the importance of integrating arts into schools.

“Braiden’s participation in this event, along with the Dan River Girls, is intended to support this theme by inspiring children — children helping/supporting other children,” says Susan Conlee, director of development for the CLC.

Teens 12 and older are free with a ticketed parent. For ticket information, visit http://www.childrenslawcenternc.org/#!birthdayblast/c1nq0

About the Children’s Law Center

Iris Sunshine, earned her bachelor’s of science from Cornell University and earned her JD from Wake Forest Law in 1989. She began her legal career as an Assistant District Attorney for the 21st Prosecutorial District, where she tried numerous felony cases and focused upon the prosecution of adult sex offenders and the protection of children. She joined the Children’s Law Center in 2008 as a staff attorney. She was appointed executive director in January 2011. Iris Sunshine is also the director of the Wake Forest University School of Law Child Advocacy Clinic housed at the Children’s Law Center.

Dongre’s position is funded by the Jesslie Ball duPont Foundation, granted jointly to the Wake Forest University School of Law and CLC. He serves as a mentor and supervisor to students in the Child Advocacy Clinic. Milind also conducts research on outcomes in Chapter 50B cases in conjunction with the ongoing body of work by Dean Suzanne Reynolds (JD ’77) and Professor Ralph Peebles at the law school.

Buresh received both her BA and her JD from Wake Forest University. Her previous experience includes working in private practice focusing on consumer debt litigation. She was also previously employed as a social worker for the Caldwell County Department of Social Services. She joined the Children’s Law Center in May 2012. She advocates for children in Chapter 50 high conflict custody cases and in Chapter 50B civil domestic violence cases.