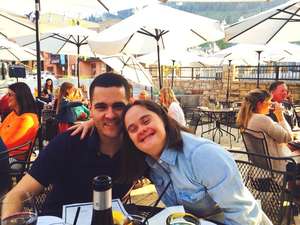 Marshall Eudy (JD ’11), corporate counsel of Mood Media, was profiled in the following Austin American-Statesman article, “Marshall Eudy and the making of a perfect family,” published on Oct. 5, 2016.  The article details his relationship with his beloved sister Gracie, who was born with Down syndrome; his involvement with Down Syndrome Association of Central Texas and more.

When Marshall Eudy was in the fourth grade, his beloved sister, Gracie, started the first grade.

“Gracie loved to ride the school bus in the mornings,” her brother recalls. “I would always go with her to make sure she made it OK. But when we arrived at school, Gracie didn’t want to get off the school bus.”

Then one day, they rode with a new driver who didn’t know Gracie at all.

“She refused to get off,” Marshall says. “It became clear that I was already late for class, and I was much more stressed than I should have been about that. But she showed a fear and stress that was different. And I recognized that.”

It was around this time that Marshall, now 30 and an attorney, fully realized that he and Gracie, now 28, were not alike in some fundamental ways.

Born with Down syndrome, Gracie — these days she lives independently with housemates and works at an Austin-area H-E-B — remains extremely close to her brothers. Parker, her other brother, attends law school.And for at least 25 years, the Eudy family has also been intensively involved with Down Syndrome Association of Central Texas, which holds its annual Buddy Walk on Oct. 23.“Having a close family member with Down syndrome is a tremendous blessing,” Marshall says. “Part of what I mean is that it teaches you to view the world through a different lens. This can be both enlightening and freeing.”