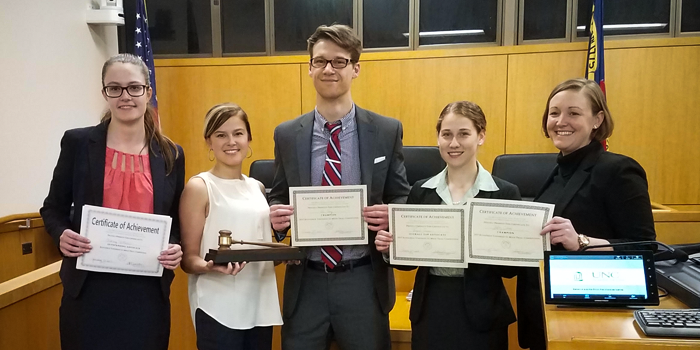 “We competed in five rounds over two days to bring the trophy home to Wake Forest Law,” DiMuzio explained.

Associate Dean of Administrative & Student Services Ann Gibbs congratulated the team members on their accomplishment saying, “We are so proud of you!”

According to the UNC Law website, the competition is named for its generous sponsors, Kilpatrick Townsend, and held each January at the University of North Carolina School of Law for first-year students from UNC and other North Carolina law schools, organized by the Broun National Trial Team.

Kilpatrick offers a unique chance for first-year law students to gain first-hand trial advocacy experience in a friendly, open setting. Though inherently competitive, the competition is deigned to be an accessible, low-stress learning opportunity for any student interested in litigation, regardless of their experience level. Accordingly, the competition focuses on development of trial skills rather than knowledge of the law.