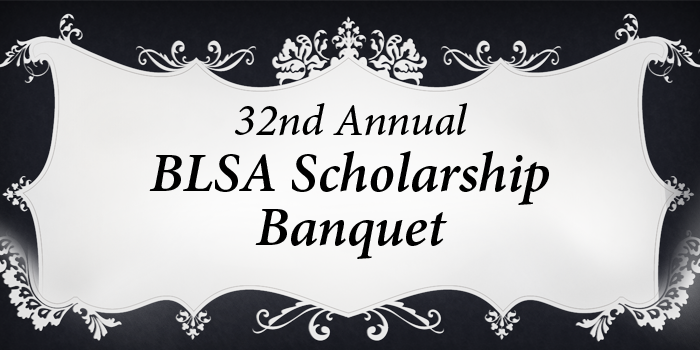 The annual Wake Forest Black Law Students Association (BLSA) Banquet, established in 1985 to fund three student scholarships, will be Friday, Feb. 10, in the Hearn Ballroom of the Winston Salem Marriott. This year’s theme,  inspired by the uplifting words of President Barack Obama, will be “Yes We Can. Yes We Will.”

The event, celebrating the spirit of hope and progress that Wake Forest Law students embody and intend to carry into practice, will begin with a cocktail reception at 6 p.m., followed by dinner and an awards program at 6:30 p.m.

The recipients of three Wake Forest Law BLSA scholarships and the Legacy Award will also be honored during the function. The BLSA Legacy Award is given each year to a faculty member who embodies dedication and commitment to the lives of black law students and whose ardent and sustained support of BLSA has impacted the organization as well as the lives of individual members.

The Wake Forest Law BLSA Scholarship fund was established in 1984 with gracious donations from faculty, firms and alumni to assist law students with tuition.

Wake Forest students, faculty and alumni are invited to attend, and tickets for the event are $65 per person. Ticket purchases must be made no later than Feb. 3. BLSA will also be accepting donations to the scholarship fund, and invites donors to include their name and organization so that they may be recognized during the event.

The National Black Law Students Association (NBLSA), founded by the former mayor of Prichard, Alabama, Algernon Johnson “AJ” Cooper, at New York University Law School in 1968 to articulate and promote the needs and goals of black law students and effectuate change in the legal community, is comprised of nearly six thousand minority law students from over 200 chapters across the United States and in six other countries.