Barnhill of Winston-Salem, North Carolina, whose wife, Carolyn Barnhill, accepted his posthumous award, was a state and federal litigator and an active member of the national and local Forsyth County Bar.  He acted as a mentor to many North Carolina lawyers and judges. 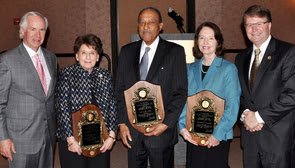 Former Chief Justice Billings of Wilkesboro, North Carolina, served as a Forsyth County District Court judge in the newly modeled District Court system in 1968. She was later appointed justice to the N.C. Supreme Court in 1985 and became chief justice the following year. She was the second woman to hold this position in the state, according to the North Carolina Administrative Office of the Courts, and the first woman to serve as president of the N.C. Bar Association.

For many years, Chief Justice Billings was a Wake Forest Law professor, as well as an influential figure in the establishment of Elon University law school. Since her professional retirement, she has continued her involvement in the Bar and in higher education.