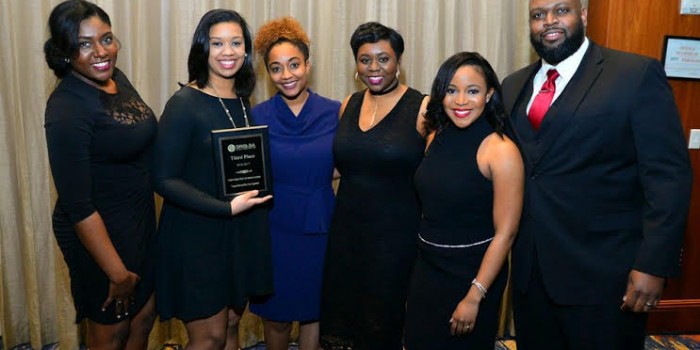 Coached by Sonny Haynes, a civil litigation and education law associate at Womble, Carlyle, Sandridge & Rice LLP, the Wake Forest Law teams competed against 12 other teams across the southern region in the competition this year. During the last rounds of competition, the Wake Forest team faced University of Florida, Nova Southeastern University and Florida State University.

Throughout the competition, the team received recognition from the judges who referred to the team members opening and closing statements as “excellent” in their use of strong case themes which they incorporated into their examinations of witnesses. Team members were also praised for their knowledge of the rules of evidence and making clear and concise arguments in their motions practice.

Highlights included O’Neil, Glass, Rice, and Willis convincing the presiding judge to dismiss some of Plaintiff’s claims on a motion for judgment as a matter of law at the conclusion of Plaintiff’s case-in-chief.  The team consisting of Kennedy, Williams, Burgess, and Lamonte consistently presented convincing expert witness testimony and demonstrated a command of the courtroom with excellent openings and closings, the judges commented.

Coach Haynes said, “The team was successful because they acted as a team who supported each other and world together tirelessly to hone their trial skills in practice.”