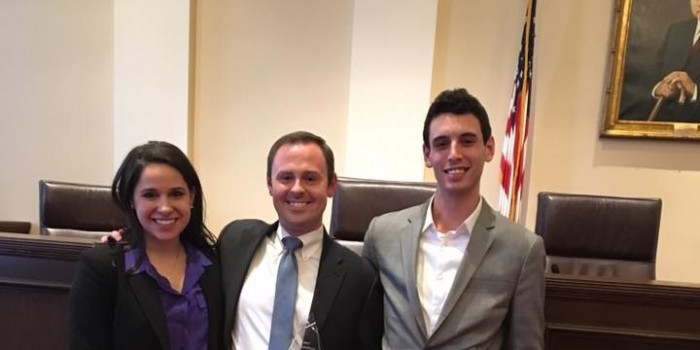 “I am in awe of the winningest trial team coaches in Wake Forest history: Mark Boynton (JD ’97) and Stephanie Reese (JD ’96).  I have no words to express how proud I am of them, and I am very seldom at a loss for words,” said Professor Carol Anderson, director of Trial Practice and the Litigation Externship Clinic.

Daniel Stratton (JD ’17), Sophia Vazquez (JD ’17) and Joe Karam (JD ’18) defeated host school University of Georgia in the semi-finals and then defeated Emory University in the finals.  The team now moves on to nationals March 22-26 in Fort Worth, Texas.

The following is an email sent by Boynton, along with Reese, announcing the victory:

“Once again, it is my great pleasure to announce Wake Forest’s victory as Regional Champions in the National Trial Competition.  We have won three years in row now, an accomplishment that frankly challenges adequate explanation to folks who are unfamiliar with trial ad competition.  The team traveled to Athens, Georgia, to compete against 20 other teams over three days. Only two preliminary rounds were scheduled.  he format then cuts the field from 21 to eight semi-finalist teams in two brackets, ultimately producing two winning teams representing the region at nationals in Fort Worth, Texas, later this semester. Making the cut is extremely hard; making the cut with two teams from one school, much harder; winning – even harder.  Winning three years in a row in this region is something very special.”

Boyton continued, “Every year, I promise these students that while every school has smart and talented students, there will never be a team better prepared than Wake Forest.  This year we needed help to keep that promise, and our school legacy met the call.  The host originally indicated the competition would occur Feb. 16-18 in Atlanta.  On Jan. 26 we discovered that Wake Forest was inadvertently omitted from an email to the region setting the competition for this past weekend in Athens, Georgia.  Facing the loss of a full week of practice, the entire Wake Forest trial advocacy community rallied in a Rapid Response Team. Adjunct Professors Matt Breeding (JD ’06) and Don Pocock (JD ’00), Judge David Hall, Aindrea Pledger (JD ’10), Aaron Berlin (JD ’10) and Steve Berlin (JD ’84) all generously donated hours of their time to help judge, coach breakout sessions and work one-on-one with students on discreet parts of the trial assigned by Stephanie and me. The results of this remarkable community effort sparkled!”

“With only two prelimianry rounds, the pressure to be near perfect in order to make the cut increases dramatically.  BOTH Wake Forest teams made the cut!  Our squad of Daniel Stratton, Sophia Vazquez  and Joe Karam defeated the host school UGA in the semis and then defeated Emory in the finals.  Two of the judges from the panel sought me out after the trial and offered to come to Winston to judge our team in preparation for Nationals. 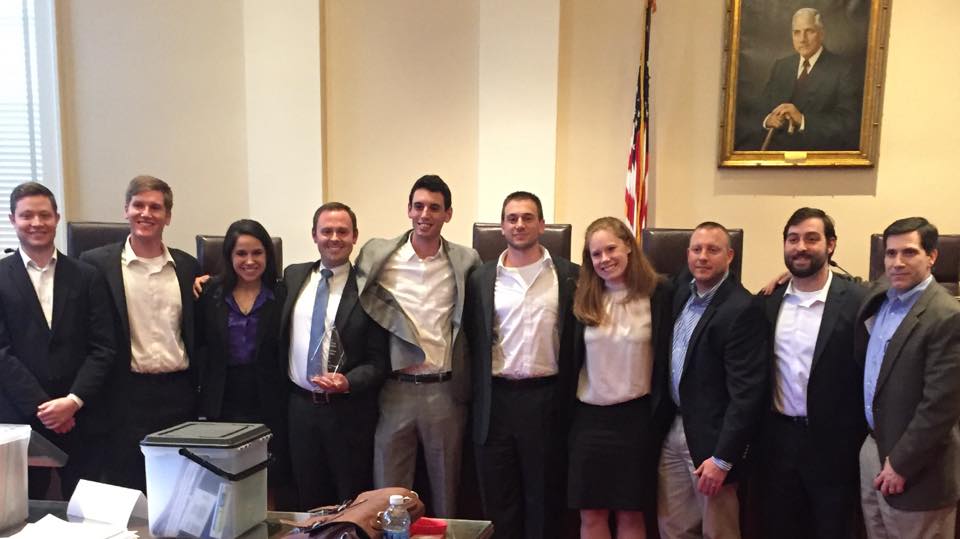 The National Trial Team, which won the regional competition, moves on to nationals March 22-26.

“Our squad of Lauren Stovall (JD ’17), Brad Simon (JD ’18) and Zach McCamey (JD ’18) faced Campbell in the semi-final round and lost a close trial.  Many of you will recall that Ms. Stovall and Mr. Simon joined Mia Falzarano (JD ’17) and Drew Culler (JD ’17) representing Wake Forest superbly at the National Tournament of Champions this past fall.

“Our three alternates, Jon Salmons (JD ’17), Nick Bedo  (JD ’18) and Shawn Poole (JD ’18) not only performed outstanding work supporting the squads during the competition but were needed to act as witnesses in all prelim rounds.  Once again, coaches, competitors, judges and the host praised our students for well-prepared, intelligent and fair work as trial witnesses.

“Every year I try to explain our pride in these students, this program and our school, but this year sets yet another standard.  Last year we saw the real culmination of when the students practice as squads but compete as one team.  This year, with the work for the Tournament of Champions and the response to the surprise schedule, we saw what happens when this entire program puts its weight behind the students. While every win is a ‘team win’ and every loss is a ‘team loss,’ the cooperation and unhesitating support of the people I listed above quite literally gave the structure for these students to compete and prevail.  We, on the National Trial Team, are one team; but WE as Wake Forest Trial Advocacy are ONE program and when we gather our resources we accomplish amazing things.

“As always, we are deeply grateful to the deans who continue to support this program and the students.  Stephanie and I especially thank the group named, above without whom our team would not have been as well prepared.

“Now we await the national problem materials, gather our breath and gird ourselves for Texas – AGAIN!,” Boynton concluded.