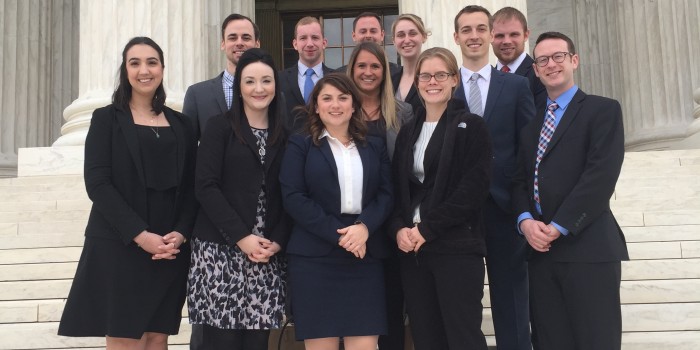 Members of the 2016-17 Appellate Advocacy Clinic pose on the steps of the U.S. Supreme Court in March 2017.

Members of the Appellate Advocacy Clinic traveled to Washington, D.C., to observe an oral argument at the U.S. Supreme Court and then had the extreme honor of meeting with Justice Ruth Bader Ginsburg on Feb. 27, 2017, says Professor John Korzen (JD ’91), clinic director.

The clinic members attended oral argument in Packingham v. North Carolina, a case involving a First Amendment challenge to a North Carolina statute. The petitioner was convicted of violating a state statute that prohibits all registered sex offenders from accessing any commercial social media websites that minors can join — which includes such sites as Facebook, Twitter and LinkedIn — even if their convictions had nothing to do with the internet. The petitioner, who years before had been convicted of a crime that had nothing to do with the internet, was convicted of violating the law after he noted on Facebook that he had had a traffic ticket dismissed and praised God. The clinic submitted an amicus brief on behalf of three organizations that support the petitioner’s First Amendment rights.

“The oral argument was outstanding,” Professor Korzen said. “Hearing Justice Kennedy use the concept of a ‘public square’ or Justice Ginsburg refer to the ‘marketplace of ideas’ in the modern First Amendment setting of the internet was fascinating.”

After the day’s arguments, clinic members met with Justice Ginsburg in the “Lawyers Lounge,” a conference room near the courtroom. Justice Ginsburg graciously answered numerous questions on a variety of topics, including memorable cases she has worked on, who inspired her as a writer and her advice for 3Ls about to enter the legal profession.

Drew Culler (JD ’17) wrote on Facebook, “Yesterday I met Ruth Bader Ginsburg. When asked about what young lawyers should be aware of, she said the following: ‘Upholding the fundamental values that our country was built on, like freedom of the press.’”

Fellow clinic member, Malorie Letcavage (JD ’17), added she is incredibly grateful to have the opportunity not only to hear an oral argument that the Appellate Advocacy Clinic had some part in, but to be able to meet Justice Ginsburg.

“It is not everyday that I get to meet one of my heroes, and hearing her speak only increased the incredibly high opinion I have of her,” Letcavage says. “Meeting Justice Ginsburg in person affirmed all the reasons I wanted to be a lawyer in the first place. She is proof that if you work hard and advocate for what you believe in, you can make a difference. The fact that she took the time to meet with our clinic and share her insights speaks to the caliber of person she is, as does her parting line before she left us, “Well I’ve got a lot of homework to do…” Meeting Justice Ruth Bader Ginsburg will continue to be one of the highlights of my life, and I would have never had that chance without Wake Forest’s connections and network, as well as our amazing Appellate Advocacy Clinic.”