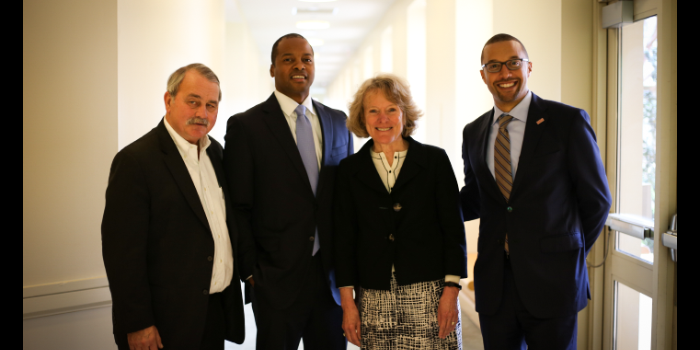 “It is an honor to have Sashi Brown as our Sager Series speaker,” said Professor Omari Simmons, director of the Business Law Program, who interviewed Brown, his former law firm colleague, in a conversation-style format in front of a large audience of about 200 people including students, alumni, staff and faculty. “His management of an NFL franchise and his impressive legal background offer great professional insights for our students and the entire Wake Forest community.”

Professor Simmons added,  “We could not have a better speaker whose career reflects the intersection of law, business and sport.”

Brown described the duties and challenges of his role with the Cleveland Browns. In his position, which is in essence the general manager of the team, Brown is responsible for creating a roster, managing and scouting staff, talking to the media, interfacing with NFL officials and ownership and much more.

The interview covered a range of topics from the importance of a legal background, crisis management, to employee health and wellbeing.  Brown highlighted the vital importance of fans and the broader community to organizational success: “One of the main reasons I joined the Browns is because Cleveland’s fan base is unbelievable,” Brown said.

Brown also gave students career advice, emphasizing developing relationships and trusting in your organization, learning how to say “no” and finding a mentor. After the interview, Brown responded to audience questions on a range of topics including potential NFL draft picks, which garnered laughs from the audience.

Brown previously held the position of executive vice president and general counsel with the Browns’ organization. Prior to working with the Cleveland Browns, Brown served as general counsel to the Jacksonville Jaguars. He began his legal career as an attorney with Wilmer Hale, a private law firm based in Washington, D.C. Born in Boston, Massachusetts, Brown earned his bachelor of arts degree from Hampton University and his juris doctorate from Harvard Law School.

The Sager Speaker Series is named for Thomas Sager (JD ’76), former vice president and general counsel for DuPont Co., and current partner at Ballard Spahr LLP. Sager was a strong and early proponent of diversity in the legal profession and helped pioneer the DuPont Convergence and Law Firm Partnering Program, or DuPont Legal Model, an industry benchmark that has received national acclaim for its innovative approach to the business of practicing law.