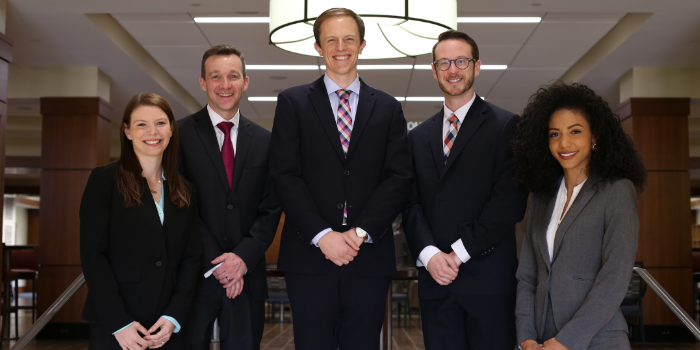 The team was coached by Matthew Breeding (JD ’06) who issued the following celebratory statement:

“The Wake Forest University School of Law AAJ trial team has won the 2017 National Championship. And not only did it do so with the class, dignity, and professionalism for which our school has become known, it did it with style. A convergence of talent, teamwork, and rhetorical brilliance, this team – your classmates – made being the best trial team in the country look effortless. They demonstrated that a combination of intelligence, passion, and camaraderie is more than just the key to effective advocacy, it’s also a lot of fun. The awe they evoked in others was a direct result of the joy they felt in themselves and the affection they had for each other.

I’ve had the privilege of being the head coach of AAJ for nearly five years and was an assistant coach for the six prior, and in that decade there has never been a team like this. They possessed something magical, something of myth. Cheslie Kryst gliding through the courtroom with grace and elegance. Ethan White dissecting an expert witness on cross-examination with both respect and surgical precision. Drew Culler’s evocative story-telling ability, his disarming wit, and his genuine goodness.

And Mia Falzarano who possesses something that language cannot address. Already the most decorated Wake Law student in recent memory, with two AAJ trial team regional championships AND this year’s moot court national championship, Falzarano put on a clinic. Judges described her as “flawless” “phenomenal” and “magnificent”. The coach of a competing school told me she was the best student advocate he had ever seen. The truth is, she may be the best student advocate any of us will ever see.

With Falzarano at the helm, these four young lawyers did something special. They did something that has never been done before by a trial team at this law school. They won the national championship for Wake Forest University School of Law.

They went undefeated through the three grueling preliminary rounds, defeating Maryland, the University of California, and Harvard, earning the number one seed going into the quarterfinals. Sustained only by a box of Sour Patch Kids and some bottled water over the fifteen minutes they were given for lunch, they went into a round against the best team they would face the entire tournament. Loyola-Marymount was prepared, sharp, and honest. But Falzarano and Culler were unstoppable, winning the round 2-1. Most impressively, the two teams showed each other true respect during the round and genuine warmth when it ended.

After learning at a late-night reception that they narrowly defeated Loyola, the team rushed back to the hotel to discuss how to improve going into the Final Four. The next rounds – their last rounds ever – began promptly at 9:00 the following morning. Against Tulane in the semifinals, Kryst and White were transcendent. White’s confidence and charm became incisive and penetrating, his control unquestionable. Kryst was not only regal and elegant, she was ethereal. Every eye in the courtroom was on her as she spoke with eloquence and moved with grace. After this sublime performance in the semifinal, the team advanced to the national finals.

Winning the coin toss, their opponent in the finals gleefully selected to be the defendant, unaware that Falzarano and Culler were waiting. It was decisive. As if knowing it was their last round, the two veterans humbly smiled, laughed, and tried the case with an underlying bliss. They made it look easy. It was a pleasure to watch. Also in attendance and support were the students and coaches from Loyola-Marymount. With an entire day to themselves to do anything they wanted, they came to support us as friends. It was a friendship borne in combat.

After what felt like hours, the results were announced. Wake Forest University School of Law was crowned National Champion. Your classmates – Ethan White, Cheslie Kryst, Drew Culler, and Mia Falzarano – are the best trial team in the United States.

After the competition ended, each separately stated that the best team they faced all season was the other team from Wake Forest – Kendra Stark, Katherine Ririe, Libby Casale, and Anna-Bryce Flowe – whom they narrowly defeated in the regional championship in Raleigh to advance to the national round. Iron sharpens iron.

Of course, neither team would have been as successful without the unwavering support and infectious positivity of Stephanie Criscione. Although early in the season she was asked to be an alternate, Criscone remained steadfast in her support of the team. She showed initiative, analyzing the case from multiple perspectives, identifying weaknesses, bolstering strengths. Most importantly, however, in an objectively unenviable situation, she remained unshakably upbeat.

I also saw the influence of Professor Carol Anderson on this incredible group of people and the dignity with which they we carry ourselves. It was yet another reminder of Professor Anderson’s impact on this proud institution.

This team was a joy. I’m humbled to have been able to share this moment in time with them. Please congratulate them. This is a special group of people.”