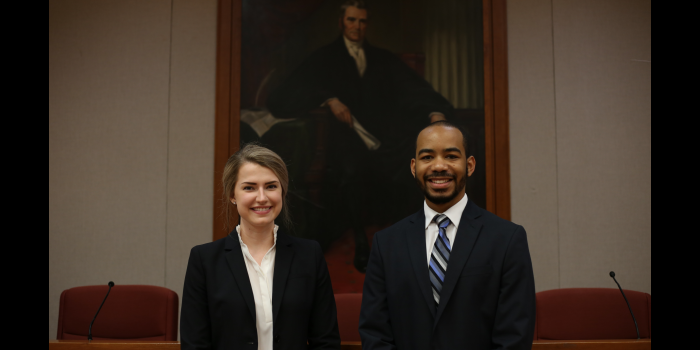 Bouchez argued in opposition of Jonathan Patton (JD ’19), who was named runner-up of the competition. Patton is a native of Rock Hill, South Carolina.

The judges were highly complimentary of both finalists.

Judge Dillon said, “I would be very pleased to have either of you argue in front of me anytime, you both did an excellent job. I am very impressed by both of your ability to make smooth transitions, stick to your arguments, you knew the record well and the law well. I think Mr. Patton made very good use of the facts of this case and Miss Bouchez you made very good use of the law. A lot of attorneys get flustered when asked a question and can’t get back to their argument but neither one of you got flustered. I thought you did an excellent job.”

Leading up to the event, which is held each spring for first-year law students, 103 students wrote a brief and argued twice, once “on-brief” and once “off-brief.” After two weeks, 16 students were invited to join Moot Court, and competed in the following week in an elimination tournament leading up to the final round.

Ashley Bouchez (JD ’19) was not the only student to take home an award. Distinctions for Best Brief, Best Oralist and the Debbie Parker Memorial Moot Court Service Award were also awarded.

The top 16 competitors are invited to join the Moot Court Board. At its discretion, the board also takes honorable mention finishers who demonstrated exceptional writing or oral advocacy skills during the preliminary rounds. The 16 competitors then argue in elimination rounds, with the written brief score counting less in each round. The final competitor becomes the George K. Walker Moot Court champion. A list of the past winners is located on the Moot Court website.

This competition is named after Professor Walker, who founded the intramural moot court competitions at Wake Forest. Professor Walker also teaches Admiralty, Civil Procedure, Conflict of Laws, Federal Jurisdiction, International Law and National Security Law. He joined the Wake Forest law faculty in 1972 and was promoted to professor in 1977.