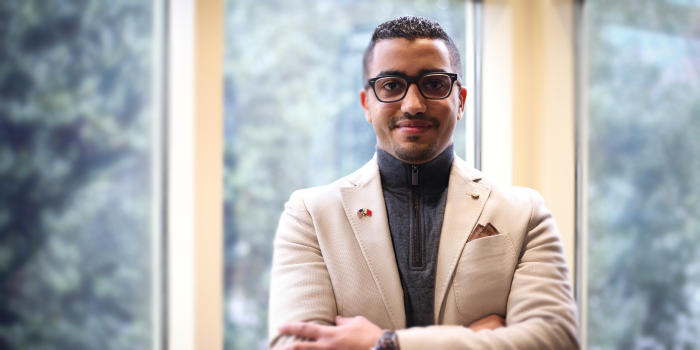 After hearing about Wake Forest Law’s strong ranking and reputation from a professor at University of Bahrain, Abdulla Husain (LL.M. ’17) knew it was the ideal place for him to pursue an LL.M.

“Studying in the U.S. is not just a bourgeoisie idea or capitalist way; studying abroad is a right,” said Husain, whose home country is the Kingdom of Bahrain, a small Arab monarchy in the Arabian Gulf. “We have a right to redeem our country with the knowledge we gained. I would like to thank his Majesty the King Hamad bin Isa Al Khalifa for all the support he gives his people.”

Although he was initially overwhelmed by the vast differences between the United States and Bahrain, Husain, an International Merit Scholarship recipient, quickly adjusted to his new home. Students and staff at Wake Forest Law helped him and supported him during his transition.

“The people of Winston-Salem are so kind,” he said. “Not to mention, the city is small and cozy. All of that made me feel like I am at home in Bahrain. I never felt homesick.”

Husain says Adjunct Professor David Levine’s Internet Law course has been his favorite because it introduced him to a field that could also benefit Bahrain. Husain also enjoyed Professor Ralph Peeples’ Torts course because of its connections to Bahraini Law.

“Professor Peeples is an amazing professor and the subject is so interesting,” Husain said. “I always think about it in a comparative way to the Bahraini Law. It gave me both the civil law and common law knowledge about torts.”

Husain has befriended his Wake Forest Law peers and appreciates their sincere interest in working with people from different cultures. He has joined extracurricular activities and even ran as the LL.M. representative of the Student Bar Association (SBA). He has worked as a research assistant, studied at the Human Rights Legal Clinic and participated as a co-coach and team member in the Jessup International and Almaktoum moot court competitions.

Since attending Wake Forest Law, Husain has gained a broader perspective of legal issues in regards to civil and common law. He intends to use the legal critical analysis and practical skills he gained from his courses after graduation.

“I learned that I should not be confined to the mere text of the law,” he said. “It is not always ‘one plus one equals two.’ It depends on the circumstances of each case.”

Husain hopes to use his newfound knowledge and skill for the betterment of Bahrain. “Changing the world will not begin unless you can change yourself first; studying and the pursuit of knowledge will do just that without any doubt,” Husain added.