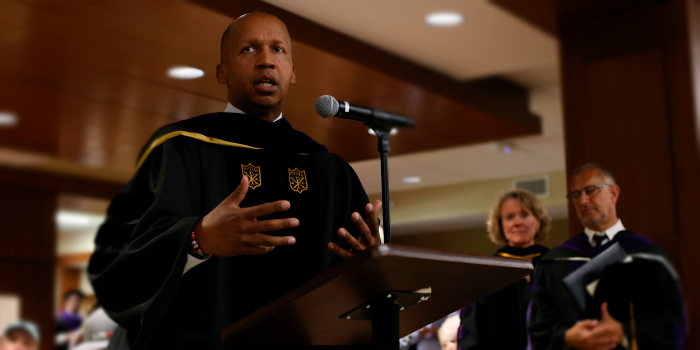 “Just Mercy” author Bryan Stevenson, who received an honorary degree from the law school during the 2017 Commencement exercises, has four words of advice for Wake Forest Law students.

He told the law graduates and their families and friends as well as faculty and staff gathered in the Worrell Professional Center on Monday, May 15, following Commencement exercises that he wanted to offer four words of advice about how “we can change world.”

“I am really excited to see graduates from this law school in particular because at this law school many of you have had the opportunity to get an understanding of the challenges that we face and to appreciate the difficulties those in power face.”

His first words of advice were: “If you want to advance justice, I hope you will be willing to get proximate to the problems. We can’t stay at a distance. We need to find ways to get closer to those on the margins. There is a power in proximity. There you will find the power to change.”

The third thing Stevenson advised was, “you have to commit yourself to staying hopeful. It’s the key to your power. We need lawyers with hope. Hope is what gets you stand up when others sit down. Your hope is your power and it’s critically important to protect it…You’ve got to be brave. You can’t be committed unless you’re bravery is connected to your hope.”

Stevenson added, “Your willingness to change the world is deeply needed.”

“He’s one of the most important voices of our time,” Dean Suzanne Reynolds (JD ’77) said. “We feel a soulful connection to Bryan Stevenson and his work.”

Stevenson’s New York Times bestseller is about his inspirational journey to founding the Equal Justice Initiative. His memoir served as the subject of a book discussion for professors and first-year students entering Wake Forest Law in fall 2016. The students were asked to read “Just Mercy” before gathering with a small group of classmates for dinner and discussion with a professor. New undergraduate Wake Forest students also had the opportunity to read “Just Mercy” as a summer project in 2016.

Stevenson is the founder and executive director of the Equal Justice Initiative, as well as being one of the most respected public interest lawyers in the country. Through his efforts, Stevenson has reversed death penalties for condemned prisoners. According to his Bryan Series bio, Nobel Peace Laureate Desmond Tutu has called Stevenson “America’s young Nelson Mandela.” His efforts have reversed death penalties for dozens of condemned prisoners. He is the recipient of the MacArthur Foundation “Genius” Grant and was one of the TIME 100 in 2015.