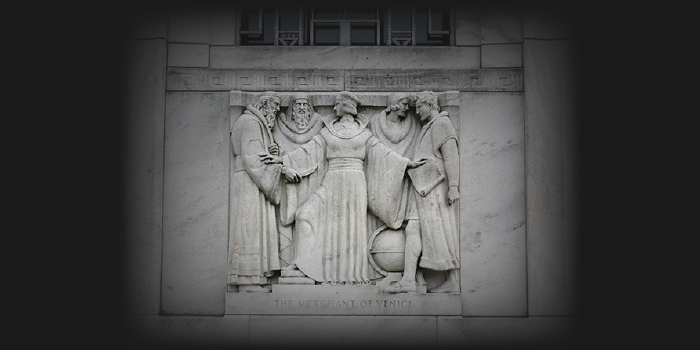 The Library of Congress will host “Justice for Shylock: A Mock Appeal Commemorating the 500th Anniversary of the Venice Ghetto” at 5 p.m. on Wednesday, June 21, 2017, in the Coolidge Auditorium at the Thomas Jefferson Building in Washington, D.C. This event is free and open to the public. Registration does not guarantee seats.

The event will also be Livestreamed on the Library’s Facebook page at facebook.com/libraryofcongress and its YouTube site (with captions) at youtube.com/LibraryOfCongress.

The program is a mock appeal of Shylock’s case from Shakespeare’s “Merchant of Venice” taking place after the play itself ends. Actor Edward Gero will portray Shylock.

Dean Suzanne Reynolds (JD ’77) and Professor Dick Schneider, Associate Dean for International Affairs, will join Associate Justice of the U.S. Supreme Court Ruth Bader Ginsburg, former U.S. Ambassador to the OECD Connie Morella and Micaela del Monte from the European Parliament on the panel of judges presiding over the appeal. The case will be argued by Michael Klotz (JD ’15) of Jones Day New York; Law Librarian and Professor Teresa Miguel-Stearns of Yale Law School; and Eugene D. Gulland of Covington LLP. Assistance will be given by James Shapiro of Columbia University and Michael Kahn of the Shakespeare Theatre Company.

This event is the last of three events hosted by the Law Library to commemorate the 500th anniversary of the founding of the Jewish Ghetto in Venice. Tickets and registration for this event can be found on Eventbrite.