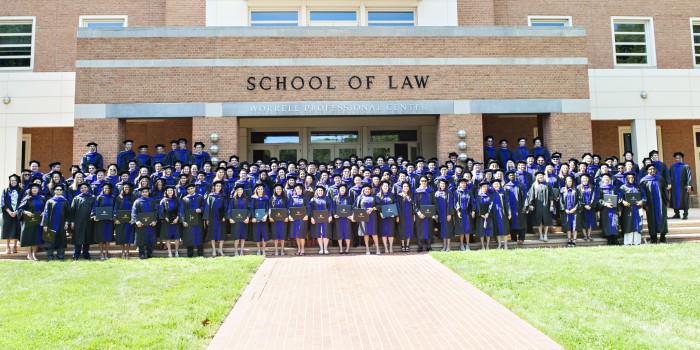 The law school’s 43nd annual hooding speakers, Professor of Practice Steve Garland (JD ‘80)  and Justin Reissman (JD ‘17) were chosen by the Class of 2017 as the faculty and student speakers to address the class at Hooding. Professor Garland was also named by the class as Professor of the Year with Sonya Casstevens, Lead Faculty Administrative Assistant, named as Staff Member of the Year.

Distinguished Faculty Speaker Professor Garland, who is retiring this year, told the Class of 2017 he is convinced the law requires the best of each generation. “You are among the best of yours and the law is lucky to have you,” he said. “As you sit here today as ready to tackle the law as my brother did 40 years ago in the same chairs you are sitting in, the graduating law class of 2017 are the smartest people in this room. I have good grounds when I say you are the smartest people in the room because each of you sits here knowing that you’re not the smartest person in the room. As you start your career it is good to remember the most important trait as a lawyer you can have is your capacity for doubt. This will drive you in your new role as a lawyer … and we will be proud of you to the maximum.”

Reissman thanked the faculty, staff and administrators of the law school along with his classmates and then asked the question, “Do Americans believe in justice for all?

“When I made it back to school I began to see the law could and should be used to fight for the rights of many, not just the few. Our class would transform a group of loose pro bono projects into a cohesive program. In the past year we grew the program by 5,376 hours of pro bono work — that’s close to one quarter of all pro bono hours logged in history of law school; 71 percent of our class participated in pro bono work. We helped expand justice and the culture of the law school proving that justice for all is not a phrase that rings empty to Class of 2017.  Wake Forest Law provided an atmosphere where students are encouraged to collaborate not compete with each other and to help those in need. We are a class of action and we will continue to strive to meet the ideal of justice for all. Growing up I didn’t know any lawyers but now I feel extremely honored to know so many. These graduates have changed me for the better, Wake Forest Law for the better and I know they will change the world for the better.”

You can listen to both speeches at livestream.com/wfu/2017lawhooding.

Executive Associate Dean Jonathan Cardi administered the oath and congratulated the class of 2017, which received a standing ovation from family and friends in the audience.

Professor Laura Graham (JD ‘94) conferred the hoods. Following the placing of the hoods, Dean Reynolds, saying it takes a village to raise a law students, recognized the moms, especially since it was Mother’s Day, dads, “long-suffering spouses and children,” among others, for their support of the law graduates.

“As you graduate as a lawyer the times remind me of what drew so many of us Baby Boomers to the law…for the first time since 2008, I hear what a wonderful time to go to law school. The world is turning to us to teach this national civics class. We as a nation we need to listen to each other. You, the Class of 2017, you will play a special role in this national civics class. I also want to remind you that you are always ours and we are better because of you.”

Diplomas will be distributed in the Worrell Professional Center on Monday, May 16, following Commencement exercises on Hearn Plaza. “Just Mercy” author Bryan Stevenson is scheduled to speak to the law school community at 11 a.m. in the Law Commons after receiving his honorary degree.

Wake Forest University provides the recording of Commencement at livestream.com/wfu/2017commencement.

•  Sarah Margaret Saint of Huntsville, Alabama, received the American Bar Association and Bloomberg BNA Award for Excellence in the Study of Labor and Employment Law, which is given to the students who achieve the highest grade in the course.

• Stephanie Althea Jackson of Findlay, Ohio, received the Dean’s Award, which is given to honor the extraordinary contributions of a student leader.

• Christopher Joseph Salemme of Westfield, New Jersey, received the E. McGruder Faris Memorial Award, which is given to the student exhibiting the highest standards of character, leadership and scholarship.

• Meredith Elizabeth Pace of Winston-Salem, North Carolina, received the Forsyth County Women Attorneys Association Award, which is presented annually to an outstanding female graduate based upon her academic achievements, leadership, service to community, professionalism and commitment to the legal profession.

• Grace Alexandra Sykes of Durham, North Carolina, received the Laura J. Gendy Award, an award that was established by alumni, family and friends of Laura J. Gendy (JD’ 00) to provide an annual cash award to a graduating law student who exemplifies integrity, compassion for others and strength of character that were the hallmarks of Gendy, who died in August 2008.

• Daniel D. Stratton of Carrollton, Georgia, and Mia Lucienne Falzarano of New York, New York, received the Robert Goldberg Award in Trial Advocacy, which honors the memory of Robert Goldberg, a student at the School of Law, who was killed in World War II. It is an annual cash award given to the students showing the highest aptitude and ethics in trial advocacy.

• Whitney Ruth Pakalka of Houston, Texas, received the I. Beverly Lake Award, which was established in honor of I. Beverly Lake Sr., professor of law at Wake Forest University, practicing attorney, assistant attorney general of North Carolina 1951-1955, and retired Justice of the North Carolina Supreme Court. An annual cash award is given to the student or students in the law school exhibiting the greatest proficiency in the study of Constitutional Law.

• Sarah Margaret Saint of Huntsville, Alabama, received the North Carolina State Bar Student Pro Bono Service Award, which is presented annually to a student who has contributed time and talent to law-related service.

•  Christopher Joseph Salemme of Westfield, New Jersey, received the Smith Anderson Pro Bono Award for Exceptional Service, which is presented annually to a student who is a Pro Bono Honor Society member, whose pro bono service must have resulted in a demonstrated impact on increasing access to legal information to the under-served population.