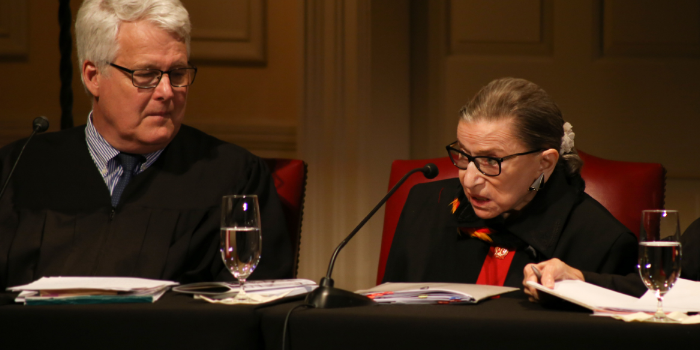 Shylock, the Jewish moneylender in Shakespeare’s “The Merchant of Venice,” has prevailed – but not for his pound of flesh. In a mock appeal organized by Professor Dick Schneider and hosted by the Library of Congress, the panel of appellate judges decreed that Shylock receive his original loan of 3,000 ducats without his having to convert to Christianity.

“Justice Ginsburg is fascinated by literature, especially drama, and by the power of literature to give us new perspectives on the lives we lead,” Professor Dick Schneider said. “She threw herself into the Shylock appeal with her usual energy and passion, which meant we had a great event.”

The performance began where the original play left off: Shylock, who was portrayed for the event by Edward Gero, received nothing of his claim, deprived of all property and sentenced to convert to Christianity.

Michael Klotz (JD ’15) of Jones Day of New York advocated on behalf of Shylock, arguing two central issues that arose in the aftermath of the loan contract between Shylock and the merchant of Venice, Antonio. According to Klotz, he was never paid and the trial judge, Portia, imposed criminal penalties on what was a civil contract.

“It can’t be the case that when somebody goes to court and asks for justice, that that’s a crime,” Klotz argued. “So we ask that the judgment be reversed, we ask for the money to be returned, we’re asking for interest and any relief that the court deems fit.”

“There’s an unusual feature of this proceeding,” Justice Ginsburg pointed out from the bench. “Antonio is surety. The beneficiary of the loan is Bassanio, but you are not suing Bassanio. You brought suit against Antonio.”

“That’s correct, your honor,” Klotz replied. “He was the guarantor on the loan and he was the recipient with the Republic of Venice for the underlying money for this argument.”

Eugene D. Gulland of Covington LLP advocated for Antonio, stating that Shylock entered into a “premeditated and deceitful course of action in order to lure Antonio into a bond that would be the means of his own destruction.” Emphasizing Shylock’s perceived vengeance plot, he asked the court to uphold its former decision, including the conversion sanction.

“[Shylock] was laying a trap,” Gulland claimed. “He understood that he would probably be repaid, but he also understood, that if he were not, this would be his opportunity to finally have the revenge that he sought so dearly.”

The appellee counsel also included Professor Teresa Miguel-Stearns of Yale Law School, who argued on behalf of Portia, seeking to discharge the heroine from the case and from future-related proceedings.

“Portia is the wrong defendant appellee in this case,” Miguel-Stearns said. “Portia’s alleged misrepresentations to the court and alleged interests in the outcome of this matter are without merit, or at most, harmless error.”

Miguel-Stearns noted that gender discrimination played a role in the appellee’s actions, citing that “pretending to be a judge was her way to advance her career as lawyer.”

Portia was later dismissed from further proceedings by the judges’ panel.

“Teresa Miguel-Stearns, you were such a wonderful advocate for your client,” Reynolds said from the bench. “I hope you tell her that I think she would be a really wonderful candidate for admission to Wake Forest law school.”

Although Shylock was not granted interest, the Court annulled his conversion as a substitutional remedy and dismissed the Alien Statute that formerly stripped Shylock of his property.

“What a wonderful homework assignment:  re-read “The Merchant of Venice” to prepare to share the appellate bench with Justice Ruth Bader Ginsburg.   The evening had all the magic of Shakespeare and the brilliance of Justice Ginsburg,” said Dean Reynolds.

“Justice for Shylock” was performed on June 21, 2017 as part of a series of events sponsored by the Law Library of Congress commemorating the 500th Anniversary of the founding of the Jewish Ghetto in Venice. This event marks the second mock appeal for Shylock organized by Professor Schneider, with the first staged in Venice during the summer of 2016. Both performances featured Justice Ruth Bader Ginsburg as the presiding judge.