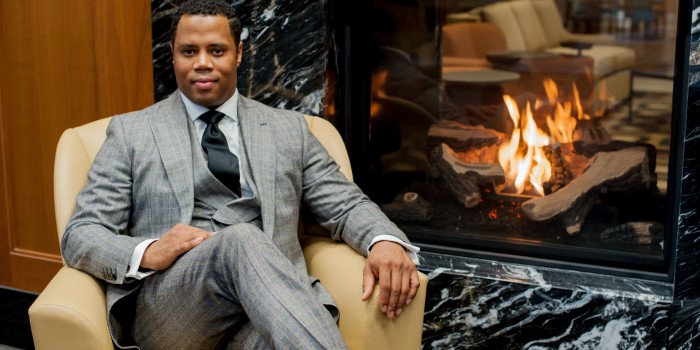 “Gregory is not only a prolific scholar, but also an active member of the community,” says Dean Suzanne Reynolds (JD ’77). “Gregory will help us find the community engagements that fulfill us personally and remind our audiences of why law matters, now more than ever.”

Professor Parks has authored or edited more than 10 scholarly books. Among them are Oxford University Press publication,”The Obamas and a (Post) Racial America?” and The New Press publication “Twelve Angry Men: True Stories of Being a Black Man in America,” which was turned into an off-Broadway production in 2016. He is currently co-authoring a book under contract with NYU Press on the history of African-American fraternities and sororities’ racial uplift work.

“Traditionally, in this position, the associate dean facilitates the import and export of scholarship and creates a scholarly environment among the faculty,” Professor Parks explains. “My predecessor, now Associate Provost Kami Chavis, augmented and enhanced the associate dean’s position by pushing to get faculty engaged beyond the law school and academic communities. My goal is to look at hard numbers and, hopefully, make our faculty more productive scholars, widen their scholarly reach and deepen their engagement in our local community and broader profession.”

Professor Parks has also authored multiple scholarly articles, covering a range of topics. He is the co-author of the forthcoming Asian Pacific American Law Journal article, “Asian American Fraternity Hazing: An Analysis of Community-level Factors,” with Wendy Marie Laybourne of the University of Maryland. His forthcoming article, “The American Council on Human Rights: Fraternalism and the Shaping of Civil Rights Policy,” will be published by the American University Journal of Gender, Social Policy & the Law.

He also recently published “’A Choice of Weapons’: The X-Men and the Metaphor of Black Power versus Integrationism” in the Indiana Law Journal, with Matthew Hughey of the University of Connecticut. His article, “Confronting Implicit Bias: An Imperative for Judges in Capital Prosecutions,” co-authored with the U.S. Court of Appeals Judge Andre M. Davis, was recently published in the American Bar Association’s Human Rights Magazine.

Prior to coming to Wake Forest, Professor Parks did trial and appellate work in the Washington, D.C., office of McDermott Will & Emery LLP. He was a visiting fellow at Cornell Law School and a law clerk on both the United States Court of Appeals for the Fourth Circuit and the District of Columbia Court of Appeals.

Professor Parks is engaged in both the community and the profession. He is the president of Alpha Phi Alpha Fraternity’s Alpha Pi Lambda (Winston-Salem Alumni) Chapter and served on the board of the Winston-Salem Urban League and the National Bar Association’s Civil Rights Section. Professor Parks is the Law & Society Association’s Diversity Committee Chair and co-Chair of its Critical Research on Race & Law Collaborative Research Network.