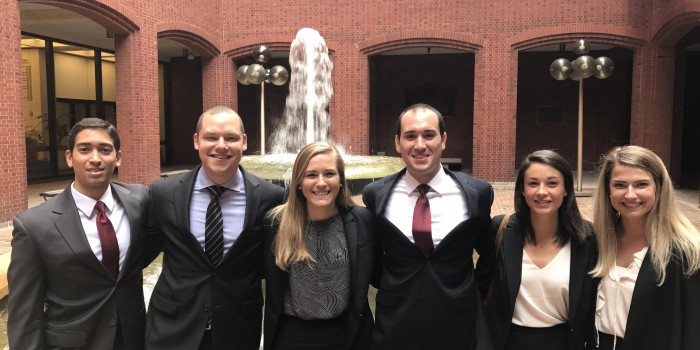 Some of the participants in the D.C. Summer Judicial Externship Program 2017

Wake Forest School of Law students participating in the Washington, D.C., Summer Judicial Externship Program had a busy summer clerking in some of the nation’s most vibrant courts as well as taking field trips to Quantico, the U.S. Supreme Court, the Library of Congress, the Federal Circuit and networking with alumni.

The program held its first kickoff mentorship mixer in Georgetown on June 1. The 11 students in the program had a chance to mix and mingle with their assigned summer mentors who are all Wake Forest Law alumni, including Elizabeth Dahl (JD ’16), Blake Stafford (JD ’17), Justin Owen (JD ’16), Grant Eskelson (JD ’11), Rob Robine (JD ’10) and Michael Grippaldi (JD ’11).

Program alumnus John Allen Riggins (JD ’18) also stopped by as he is interning at the D.C. office of Wiley Rein this summer. Professor Abigail Perdue, who is the founding director of the D.C. Summer Judicial Externship program and author of “The All-Inclusive Guide to Judicial Clerking” (West Academic Publishing 2017), organized the event to provide a networking and mentorship opportunity for the 2017 program participants.

“The D.C. Summer Judicial Externship Program is one reason I chose Wake Forest University law school and is hands down the most amazing way a student can spend his/her summer after 1L year,” says Sarah Spangenburg (JD ’19). “Having the opportunity to both work for a federal judge and take Professor Perdue’s informative class on Judicial Clerking makes this program an invaluable experience that has helped me decide my career path.”

Program participants had the opportunity to attend an oral argument on July 11 at the U.S. Court of Appeals for the Federal Circuit, where one of them worked as an extern. “We went as a class to hear arguments in the case that we have been using as our case study this summer,” Professor Perdue explained.

The students used Macias v. Army, a Federal Circuit appeal involving a termination arising from an alleged violation of the Posse Comitatus Act, as their summer case study. They wrote actual briefs filed in the matter to draft a bench memo and potential oral argument questions. After the argument, they converted their bench memo into a judicial opinion.

The program places rising second-year and third-year law students into unpaid externships at some of the most vibrant and influential courts in Washington, D.C.  As part of the program, students spend at least eight weeks externing at a participating court. Students also attend a weekly class session that is tailored to judicial clerking. Among other things, the course explores professionalism, courtroom decorum, confidentiality, judicial ethics, docket management, bench memo writing, oral argument preparation and judicial drafting.

“Understanding what happens behind the bench prepares you to excel when you appear before it,” Professor Perdue explains. “The D.C. Summer Program students enjoy a once-in-a-lifetime opportunity to gain that behind-the-scenes perspective, which provides the solid foundation they need to excel in any legal setting.”

Students also attend “Lunch and Learn” events at the Federal Circuit, Office of Special Masters, U.S. Court of Federal Claims, FBI and U.S. District Court for the District of Columbia. They are assigned Wake Forest Law alumni mentors with whom they mix and mingle at program-sponsored social events. They even enjoy unique opportunity to take guided class field trips to points of interest including Quantico and the Supreme Court of the United States.

On June 23, students participating in the program enjoyed the once-in-a-lifetime opportunity to tour Quantico where they met and mingled with FBI attorneys and agents.

Professor Perdue worked with the FBI to organize the students’ day-long visit during which they experienced a portion of the legal training that FBI agents undergo. They also participated in a shooting simulation with an experienced FBI instructor. The simulation enabled students to apply what they had learned during their legal instruction to real-life situations, such as serving a warrant, arresting a suspect and tracking a suspected terrorist. Each student played the role of an FBI agent in a video simulation and then debriefed with the instructor regarding the appropriate time to use deadly force.

“The Quantico tour was a tremendous learning experience,” said Lucas Brown (JD ’19). “The FBI instructions provided us with a tour of the facilities and an eye-opening day in the shoes of an FBI agent in training. This training provided a perspective that we will all take forward with us into our future law practice.”

During a “Lunch and Learn” in the Quantico cafeteria, students heard from an FBI attorney and Double Deacon who specializes in high-profile forfeiture issues, such as the federal government’s recent effort to seize a posh NYC tower owned by an Iranian-controlled charity and donate the proceeds to terror victims. In the afternoon, students toured Hogan’s Alley, a tactical training facility that the FBI erected in 1987 to facilitate agent training. Next, they toured the Quantico lab where they learned about crime scene reconstruction and ballistics testing. They even had a chance to see the FBI’s cache of confiscated guns.

“The Quantico tour was one of the most illuminating educational experiences of the summer,” Professor Perdue said. “It gave us all a tremendous appreciation for the split-second, life-altering decisions that agents must make on a daily basis and the incredibly stressful circumstances under which they operate.”

The same day, students had an opportunity to tour the Library of Congress. When the Library of Congress was first established in 1800, it included only 740 books and three maps. That all changed in 1815 when Congress purchased former President Thomas Jefferson’s personal library of 6.487 books and later approved construction of a stand-alone library building. The Jefferson Building opened its doors in 1897 and is now home to more than 160 million items.

Ashley Bouchez (JD ’19) described her D.C. program summer experience as “one of the best summers of my life. I’m always excited to come to work. I have the rare opportunity to work one-on-one with the judge . . . I love D.C. and have grown so much here, both personally and professionally.”

For more information on the program, visit dc-judicial-externship.law.wfu.edu.