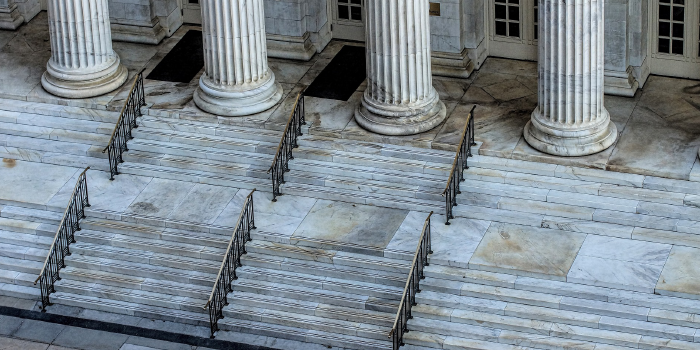 The United States Court of Appeals for the Fourth Circuit ruled in favor of Wake Forest School of Law’s Appellate Advocacy Clinic in the case of Roudabush v. Milano on Nov. 27, 2017.

The plaintiff, James Roudabush, had filed a pro se complaint in the Eastern District of Virginia against several prison officials, which the District Court dismissed under Federal Rule of Civil Procedure 12(b)(6) for failure to state claim. After Roudabush appealed, again acting pro se, the Fourth Circuit appointed the Appellate Advocacy Clinic to handle his appeal. Kelsey Mellan (JD ’18) argued for Roudabush on Oct. 24 at the Fourth Circuit courthouse in Richmond, Virginia, and did an excellent job of presenting her arguments and answering
numerous questions, according to Professor John Korzen (JD ’91), the clinic’s director.

In his complaint, Roudabush alleges that a Virginia state prison gave various preferences to inmates based on their race, retaliated against him when he complained about the disparate treatment, and thereby violated his constitutional right to equal protection. The three-judge panel that heard Mellan’s argument consisted of Judge Paul Niemeyer of Maryland, Judge James Wynn of North Carolina and Judge William Traxler of South Carolina.

The Nov. 27 opinion is per curiam, that is, without a designated author. The opinion reasons that Roudabush sufficiently alleged that the prison’s denial of certain privileges was racially motivated. The Court remanded the case for further proceedings in the District Court.

The Appellate Advocacy Clinic also won a prisoner’s appeal in the Fourth Circuit last year, in the case of Fauconier v. Clarke, which involved a prisoner’s claim under the Americans with Disabilities Act. As in Roudabush, the Eastern District of Virginia had dismissed that claim under Rule 12(b)(6).

“Our Appellate Advocacy Clinic has handled appeals in the Fourth Circuit for many years,” Professor Korzen explains, “and representing prisoners is in keeping with the Clinic’s
mission of representing indigent and non-profit clients.”