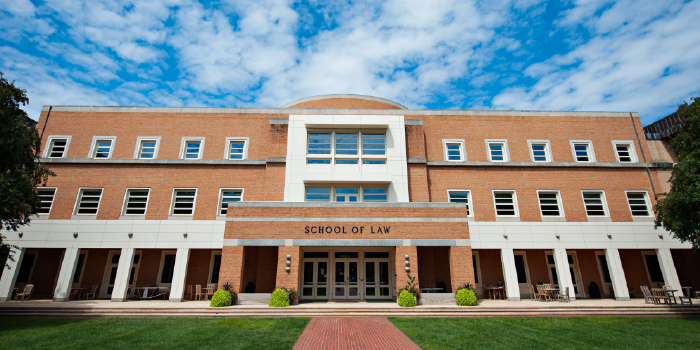 The Wake Forest School of Law will accept the Graduate Record Exam (GRE), the most widely used graduate school exam, as an alternative to the LSAT for its JD admissions process beginning Fall 2018.

The decision to accept the GRE as an additional valid and reliable admission test in the JD admissions process follows Wake Forest School of Law’s role as one of the first three law schools — along with the University of Arizona James E. Rogers College of Law and the University of Hawaii’s Richardson Law School — in the nation to have started a validation study of the GRE test in collaboration with Educational Testing Service (ETS). Wake Forest School of Law is the first law school in North Carolina to accept the GRE.

Dean Suzanne Reynolds (JD ‘77) notes the decision to accept the GRE is an effort to expand access to legal education for many students who are already considering graduate school and have taken the GRE test, but may not have the time or funds to take the LSAT.

“While we remain committed to a small entering class, we are interested in increasing the diversity of our student body, in every respect, including educationally,” Reynolds explains. “As the college of Wake Forest University attracts more and more students with STEM backgrounds and interests, the law school should be prepared, we believe, for an increasingly educationally diverse student body, with students who want to pursue a law degree, perhaps in combination with another graduate degree.”

The GRE is a computer-delivered test that is offered year round at more than 1,000 test centers in more than 160 countries.The GRE test assesses three major areas: verbal reasoning, quantitative reasoning and analytical writing, and is used by most graduate schools in the United States as a proven measure of applicants’ readiness for graduate-level work. It is taken by more than half a million people annually.

Reynolds continues, “We only recently received the final report on the predictive value of the GRE at Wake Forest School of Law, which shows that both individual and composite GRE subtests are valid predictors of grades with high reliability of GRE composite scores as predictors. The GRE scores are valid also when used in conjunction with undergraduate GPA, beyond the predictive value that the GPA alone provides.”

Wake Forest Law’s Assistant Dean of Admissions Jay Shively notes that applicants may apply for Fall 2018 admission with either an LSAT or a GRE general test score. But all those who take the LSAT must submit their LSAT scores.

The American Bar Association, which has traditionally only approved the use of the LSAT for law school admissions, is currently requiring each individual law school to study the validity of the GRE before accepting the exam in lieu of the LSAT.

Reynolds adds, “Satisfied by our study, we will consider applications from prospective students who take the GRE instead of the LSAT.  As we always have, we will consider other parts of applicants’ records — both curricular and extracurricular – as we consider candidates for our JD program.  We anticipate that the vast majority of our applicants will take the LSAT, next year and for many years to come.  But we believe that legal education and the legal profession are well served by offering another standardized test in the admissions process.”

The Winston-Salem Journal and N.C. Lawyers Weekly covered this story.