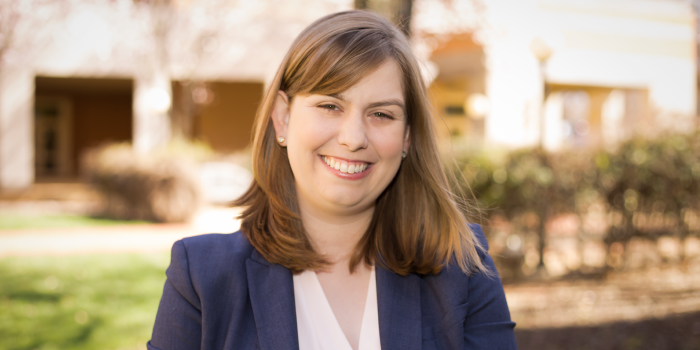 The National Jurist has named Julian, North Carolina-native Emily Scotton (JD ’18) among 20 “Law Students of the Year” in its Spring 2018 issue. The story was written by Katie Thisdell and published on Feb. 22, 2018. It is the third year the magazine has created this distinction and the third year a Wake Forest University Law student has been recognized among the nation’s top law students by the magazine. Scotton is the only law student from North Carolina to receive the honor in 2018.

The magazine states, “Great law students do more than study. They speak up for the voiceless, protect the innocent, push their school’s to do more, and serve the needy.  We honor the 20 students who contributed the most to their law schools and communities in the past year.”

Scotton is a finalist in the magazine’s South Division of law schools. The magazine writes, “Through the school’s Pro Bono Project, Scotton spearheaded the Family Preparedness Project, which helps provide durable powers of attorney for North Carolina residents who may be at risk of deportation. She helped organize bilingual student volunteers, supervising attorneys and faculty members, who met with clients in Winston-Salem over the course of four evenings in April 2017. The project will continue this spring.”

Scotton is thrilled to have received the award.

“I am very honored and humbled to be recognized alongside such inspiring law students from across the country,” Scotton says. “But more importantly, I’m proud that the work we have done in the Family Preparedness Project, and the Pro Bono Project as a whole, has been highlighted. As future lawyers, we have a responsibility to use our skills to help those in need, and I’m happy I’ve been able to do just that during my time at Wake Forest.”

Huntsville, Alabama-native Sarah Saint (JD ’17) and Charlotte-native Carson Smith (JD ’16) were recognized as “Law Students of the Year” in 2017 and 2016 respectively.

Emily Scotton is an exemplary model of pro humanitate scholarship and engagement. Emily spearheaded the Family Preparedness Project, a new initiative led by the Wake Forest University School of Law Pro Bono Project that seeks to provide durable powers of attorney for North Carolina residents who may be at risk of deportation.

As founder and coordinator of the Family Preparedness Project, Emily helped organize client appointments, a dozen bilingual student volunteers and supervising attorneys and faculty members, who gathered at the Downtown Health Plaza in Winston-Salem over the course of four evenings in April 2017. The Downtown Health Plaza is a frontline provider of primary care to the city’s medically underserved.

Using a training module and a forms packet provided by the North Carolina Justice Center, law students met with immigration clients to prepare documents under the supervision of local volunteer attorneys, including Dean Suzanne Reynolds (JD ’77).

“For me, participating in this project gave a face – actually, two faces – to the immigration debate,” Dean Reynolds says. “Through student translators, I talked with a mother and father anxious to provide for their children in the event they had to leave this country without their children. These parents, my clients, brightened as they executed the documents, and I felt a part of something really important.”

“We are ecstatic that we were able to serve so many people,” Scotton said. “We were concerned that we would encounter significant challenges since we organized this clinic rather quickly, but thanks to our student and attorney volunteers, the project came together, and now 17 individuals have the peace of mind that comes from having these documents.”

Professor Margaret Taylor who served as the faculty adviser to the Family Preparedness Project, says, “It was gratifying to establish a partnership with colleagues at Wake Forest Baptist Health. I am so impressed with the commitment by our students who eagerly stepped forward to organize and staff this project, generously volunteering their time with just weeks left before final exams.”

Growing up in rural North Carolina, it has always been in Emily’s heart to help the Hispanic community, Professor Taylor says. “Emily had worked with immigrant justice project. It was really Emily who came to me and said the N.C. Justice Center is helping immigrants prepare powers of attorney, can we think about Wake Forest School of Law doing that?”

“Emily was with me when I called to get Matt and Jessica about the feasibility of engaging alumni for this project,” Professor Taylor explained. “I honestly I don’t think I have seen a more organized student. It really was a remarkable effort. To me, it’s such a significant  accomplishment by a student: she initiated it, organized it, scheduled the clients, the law students and the supervising attorneys.”

Professor Taylor added Emily connected with the administrators at the Downtown Health Project not just to find a place to provide the service, but to find a place potential clients would be comfortable visiting.

In light of its success, the Family Preparedness Project will continue in the Spring of the 2017-2018 academic year.

Other ways of giving back

When Emily is not engaged in her own legal studies, her focus is on helping other people, specifically immigrants.

From May to August 2017, Emily worked with battered immigrant women as an Immigration Law Intern at Ayuda in Washington, D.C., where she helped with U Visas, U Visa Adjustment of Status, VAWA Cancellation of Removal, DACA Renewals and Notario Fraud issues, among others.

And from May to August 2016, she served as an Immigrant and Refugee Rights Intern for the aforementioned North Carolina Justice Center, where she conducted legal research, drafted legal memos, responded to discovery, composed legal briefs, and conducted client meetings.

Prior to law school, Emily volunteered at the FaithAction International House in Greensboro, North Carolina, where she was an Immigrant Assistance and Resource Center Intern and assisted English and Spanish-speaking clients in navigating available social services. She also volunteered for two years as a Spanish Interpreter/Translator at Ahora en Raleigh (VOLAR), a service organization run through the Department of Foreign Languages and Literatures at N.C. State University.

Emily has a paid internship lined up with Chapman Law Firm in Greensboro for spring 2018, according to Professor Taylor.

On top of her extensive pro bono reach, Emily is a dedicated and successful law student, earning grades that have kept her consistently in the top half of her class as well as a CALI Excellence for the Future Awards in Appellate Advocacy. She has also worked as a teaching assistant in Legal Writing, Analysis, and Research 2016-2017 and Appellate Advocacy Fall 2017.

Emily recently had an article published, “Not Free to Speak: North Carolina’s Language Access Past and Progression,” in the Wake Forest Journal of Law and Policy (2017).