Alumni in the News for February 2018 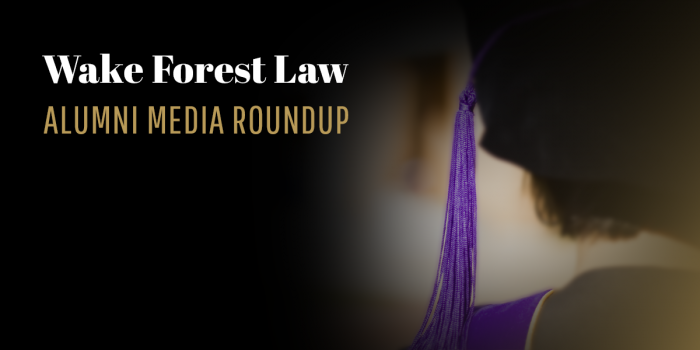 Wake Forest School of Law alumni are featured regularly in the media. Following is a roundup of news mentions from February 2018:

John Babcock, a partner at the law firm of Wall Babcock, has been named North Carolina’s best lawyer in the business law category in Business North Carolina magazine’s 2018 listing of Legal Elite. Babcock is among 16 winners of Legal Elite by practice area. He graduated, with distinction, from the University of Michigan at Dearborn in 1982, with a bachelor’s degree in administration. Babcock received his Juris Doctor in 1985 from Wake Forest University, where he graduated magna cum laude. He received a Master of Laws degree in taxation from New York University in 1987. Babcock also is a 2018 Super Lawyer and is included in the 2018 edition of The Best Lawyers in America.

Cheli Bleda and Travis Drew, who met at Wake Forest Law, were married in May 2016 at Toolbox Studio.  A feature piece about their relationship and wedding was published in the magazine on Valentine’s Day:

“As law students, the couple didn’t have too much time for courtship: their first date was a quick stop for burgers after their Friday morning classes and before a long afternoon of cramming. They went to Rose’s, a neighborhood joint connected to a gas station in downtown Winston-Salem. Afterwards, they studied for a bit before Cheli decided it was time to introduce Travis to an important figure in her life: her puppy Eli. Once they got through introductions, they took a break from studying to stroll around campus together—the first of many, many such walks the three of them would take together.”

Heather Howell Wright has been named partner at Bradley Arant Boult Cummings LLP.  Wright is a member of the firm’s Litigation Practice Group.  Her litigation practice involves a variety of commercial matters, primarily in terms of representing financial institutions and mortgage servicers in state and federal courts.  Cummings’ practice also involves real estate disputes, title disputes, breach of contract, breach of fiduciary duty, fraud and consumer protection violations. According to the brief, Wright also devotes a portion of her practice to advising commercial insurance policyholders regarding coverage available through commercial general liability, directors and officers, and errors and omissions policies.

Russ Kenyon announced his candidacy for Ontario County Court judge.  “As the only candidate with critical judicial experience, voters can look at my record and see that I am committed to serving with the highest level of integrity and honor,” Kenyon told Salamanca Press.  Kenyon, a 40-year resident of Ontario County and currently an East Bloomfield town justice, has presided over hundreds of cases covering various legal matters, including criminal, civil, small claims, landlord-tenant and municipal law matters.  Kenyon has also been a partner with his father at Kenyon & Kenyon law firm for the past 25 years, where he has worked with senior citizen-clients on long-term care, Medicaid, disability and estate planning.

Christopher M. Trebilcock has joined Clark Hill’s Detroit office as a Member in the Labor & Employment Practice Group.  Trebilcock has experience in issues arising under the FLSA and represents employers in overtime litigation, wage and hour investigations and collective actions, according to the press release.  He also has years of litigation practice in defending discrimination and wrongful discharge claims under federal and state law.  Trebilcock often litigates grievance arbitration; appears before the NLRB and MERC; acts as the chief spokesperson in collective bargaining negotiations; and gives counsel on labor relations and CBA administration.

Stephanie Reese (JD ’96) was featured in the Greensboro News and Record on Feb. 18 and the High Point Enterprise on Feb. 20:

A changing of the guard is on hand for the Guilford County District Attorney’s Office, and it may lead to a High Pointer running the office after this year’s elections. Longtime District Attorney Doug Henderson of Greensboro will retire from the office after serving this year and won’t seek another term. An aide to Henderson told The High Point Enterprise on Monday that he plans to return to private practice after serving through his current term. Stephanie Reese, a Democrat, has worked in the Guilford County District Attorney’s Office since 2000 and currently serves as an assistant district attorney in Superior Court. She graduated from Wake Forest University School of Law and received a Bachelor of Science degree in English and history at Utah State University.

Murphy Horne Fletcher (JD ’12) was featured in an MWB press release in February 2018:

Attorney Murphy Horne Fletcher is one of sixteen outstanding young lawyers from across the state selected for the North Carolina Bar Association Leadership Academy’s Class of 2018.  The mission of the Academy is to help young lawyers become more effective leaders in their communities, whether their communities be the legal profession, their firms, legal departments, etc.  At MWB, Murphy focuses on helping businesses and individuals navigate local, state, and federal tax issues.  She assists clients with tax planning and research, and also represents individuals and businesses before the Internal Revenue Service, North Carolina Department of Revenue and local taxing authorities. She also advises clients on other, non-tax regulatory issues, including federal employment regulations. Murphy is a member of the Litigation Practice group, where she helps clients pursue or defend state and federal litigation.