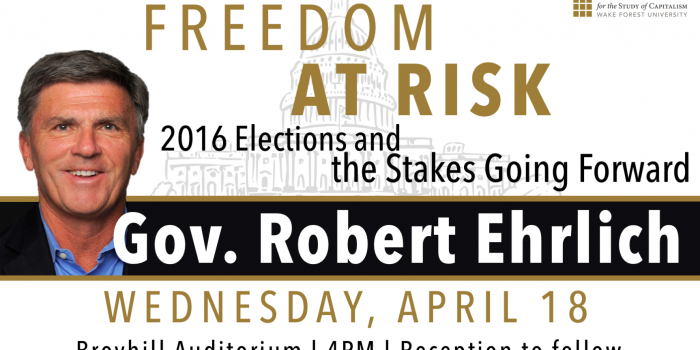 The BB&T Center for the Study of Capitalism will host former Maryland Gov. Robert Ehrlich (JD ’82) at 4 p.m Wednesday, April 18, in the Broyhill Auditorium in Farrell Hall. His presentation, which is free and open to the public, is entitled “Freedom At Risk: 2016 Elections and Stakes Going Forward.”

During his lecture, Ehrlich will highlight the progressive transformation of America by addressing Americans’ split reactions to the 2016 election. Understanding the interaction between Obama’s presidency and its impact on American Nationalism “is enormously important… because it will shape our future,” Ehrlich writes.

Ehrlich served in the U.S. House of Representatives from 1995-2003 and in 2003 was elected as Maryland’s first Republican governor in 36 years. His policies turned state budget deficits into a surplus and created 100,000 new jobs. He authored Maryland’s first charter schools law, and advocated for investments in public schools, funding for need-based college scholarships, and minority business advancement. He also authored the historic Chesapeake Bay Restoration Act to restore America’s largest estuary.

The he author of four books on contemporary American politics and issues confronting America, Erlich’s most recent book, “Bet You Didn’t See That One Coming” (2018, Post-Hill Press), analyzes the election of President Donald J. Trump, the changing of the guard in Washington, D.C., how it’s turned establishment politics on its head, and what it means for the future of the nation.

For more information about the event, please visit the events calendar or Facebook. The faculty contact for this event, Dr. Page West, is also available to answer questions.