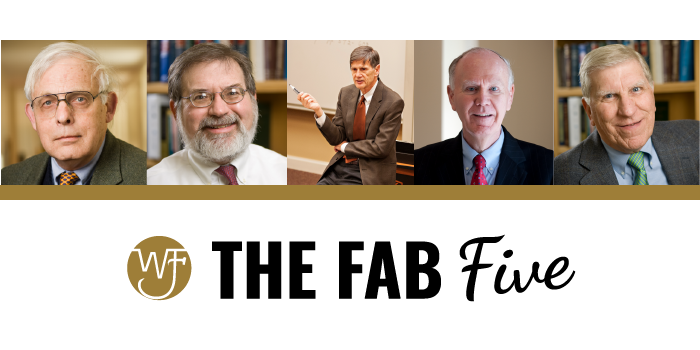 The “Last Class with Professor Rose” was held in Worrell Professional Center in the morning and a panel discussion with the “Fab Five” professors, with the exception of Professor Walker, was held in the afternoon in Farrell Hall followed by a reception in Worrell.  Those unable to attend either or both events can watch the recordings of “The Last Class” and the “Fab 5,” moderated by Dean Suzanne Reynolds (JD ’77).

Professor Foy is an award-winning professor who returned to full-time teaching after serving as Executive Associate Dean for Academic Affairs at the law school twice. Among teaching courses such as JD Contracts, Professor Foy also teaches and advises LL.M. and SJD students. He served on the Citizens Silk Plant Committee, which completed a 16-month independent review of the Silk Plant Forest Case in Winston-Salem.  According to his bio, Professor Foy has also served as a judicial clerk for Judge Griffin Bell of the Fifth Circuit Court of Appeals and he worked in the Office of Legal Counsel of the Department of Justice, the office that serves the President of the United States, and in a private practice in Greensboro.

Professor Peeples, both a distinguished teacher and scholar, is a four-time winner of the Excellence in Teaching Award at the law school, where he also served as Executive Associate Dean for Academic Affairs. He is among a small group of national scholars that employ empirical methodologies to study and evaluate the legal system. His bio also states that he has been a lecturer and manuscript author for various Continuing Legal Education programs. Prior to entering teaching, Professor Peeples was an Associate Attorney with Squire, Sanders & Dempsey in Cleveland, Ohio. He is currently a Certified Mediator in the North Carolina Superior Court Mediated Settlement Conference program.

Professor Rose is an eight-time winner of the student-voted Excellence in Teaching Award and a winner of the Joseph Branch Award for Excellence in Teaching. Professor Rose originated the “Conversation With . . .” speaker series program, which brings experienced lawyers to the law school as role models to share their stories in an informal setting with students. He also served for 20 years as the adviser to the National Moot Court Team, including advising the team that won the National Championship in 1986. Prior to joining the Wake Forest community, Professor Rose taught at the University of Akron Law School, and he has been a visiting professor at the Duke Law School and the University of Puget Sound School of Law. Before entering teaching, he was a staff attorney at the Legal Aid Society of Cleveland, Ohio, and served as an instructor in the United States Army JAG School and the United States Army Infantry School.

Professor Walker is one of the school’s most accomplished scholars and public servants. He is the editor or author of more than 10 books and monographs, 50 professional journal articles or book chapters and 30 continuing education chapters. Professor Walker chairs an International Law Association (American Branch) Law of the Sea Committee research project on the U.N. Convention on the Law of the Sea. Based on his bio, Professor Walker serves on the American Law Institute (ALI) Members Consultative Group for a forthcoming Restatement on international arbitration.  He previously served as a North Carolina Bar Association vice president and on many bar and legal education committees. A retired line Captain in the Navy Reserve, Professor Walker has served as Charles H. Stockton Professor of International Law at the U.S. Naval War College, Newport, Rhode Island.

Professor Walsh, dean emeritus of the law school, is widely recognized as one of the leaders in legal education in the United States. He has been the chairperson of the American Bar Association (ABA) Section of Legal Education, a vice president of the North Carolina Bar Association and a member of its Board of Governors. According to his bio, Professor Walsh co-founded the ABA’s Seminar for New Law Deans. He recently completed a two-year term as the president of the American Inns of Court Foundation Board of Trustees. Professor Walsh currently serves on the Federal Judicial Center Foundation Board and the Honorable Society of Inner Temple as an Honorary Academic Bencher. In 2010, Dean Walsh was awarded the ABA’s Robert J. Kutak Award and in 2017 he received the A. Sherman Christensen Award, given by the American Inns of Court in recognition of outstanding service and exceptional leadership. Prior to coming to Wake Forest, he was a litigation partner with a law firm in Little Rock, Arkansas, dean of the University of Arkansas at Little Rock School of Law, a law professor at Villanova University and an associate with a law firm in Los Angeles.